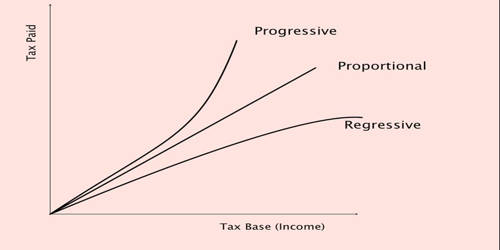 A regressive tax is a tax imposed in such a manner that the tax rate decreases as the amount subject to taxation increases. It is a tax applied uniformly, taking a larger percentage of income from low-income earners than from high-income earners. “Regressive” describes a distribution effect on income or expenditure, referring to the way the rate progresses from high to low so that the average tax rate exceeds the marginal tax rate. It affects people with low incomes more severely than people with high incomes because it is applied uniformly to all situations, regardless of the taxpayer. In terms of individual income and wealth, a regressive tax imposes a greater burden (relative to resources) on the poor than on the rich: there is an inverse relationship between the tax rate and the taxpayer’s ability to pay, as measured by assets, consumption, or income.

A regressive tax is a tax that takes a greater percentage of income from those who earn less, than from those with a higher income. The rate of taxation decreases as the income of taxpayers increases. These taxes tend to reduce the tax burden of the people with a higher ability to pay, as they shift the relative burden increasingly to those with a lower ability to pay. Examples of regressive taxes include sales taxes and property taxes, which are set at a flat percentage, regardless of who the purchaser or owner is. If someone earns $10,000 per year and pays 20% of his income in taxes, then that tax cost him $2,000. Yet, if a higher-income earner makes $50,000 per year, he pays only 4% of his income to meet that $2,000 tax. The more the individual makes, the less he will feel the imposed tax; so someone who makes $100,000 per year will only have to fork over 2% of his income to pay the same $2,000 tax.

A regressive tax is one that taxes everyone at the same rate, regardless of their income level. The regressivity of a particular tax can also factor the propensity of the taxpayers to engage in the taxed activity relative to their resources (the demographics of the tax base). This system of taxation generally benefits the higher sections of the society having higher incomes as they need to pay tax at lesser rates. In other words, if the activity being taxed is more likely to be carried out by the poor and less likely to be carried out by the rich, the tax may be considered regressive. To measure the effect, the income elasticity of the good being taxed as well as the income effect on consumption must be considered. True regressive taxes are those levied upon products like food, tobacco, alcohol, and gasoline, as well as fees for driver’s licenses, parking permits, museum and park admissions, and tolls for accessing roads, tunnels, and bridges. The measure can be applied to individual taxes or to a tax system as a whole; a year, multi-year, or a lifetime.