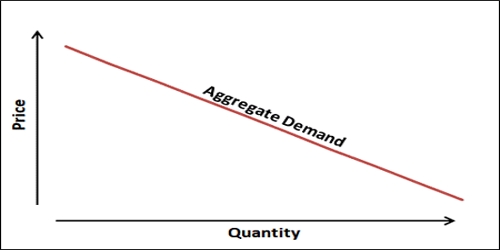 The aggregate demand curve is plotted with real output on the horizontal axis and the price level on the vertical axis. While it is theorized to be downward sloping, the Sonnenschein-Mantel-Debreu results show that the slope of the curve cannot be mathematically derived from assumptions about individual rational behavior.

Aggregate demand is the demand for all goods and services in an economy.

The law of demand says people will buy more when prices fall.

The demand curve measures the quantity demanded at each price.

John Maynard Keynes in The General Theory of Employment, Interest, and Money argued during the Great Depression that the loss of output by the private sector as a result of a systemic shock (the Wall Street Crash of 1929) ought to be filled by government spending. First, he argued that with a lower ‘effective aggregate demand’, or the total amount of spending in the economy (lowered in the Crash), the private sector could subsist on a permanently reduced level of activity and involuntary unemployment, unless there was an active intervention. Business lost access to capital, so it had dismissed workers. This meant workers had less to spend as consumers, consumers bought less from business, which because of additionally reduced demand, had found the need to dismiss workers. The downward spiral could only be halted and rectified by external action. Second, people with higher incomes have a lower average propensity to consume their incomes. People with lower incomes are inclined to spend their earnings immediately to buy housing, food, transport and so forth, while people with much higher incomes cannot consume everything. They save instead, which means that the velocity of money, meaning the circulation of income through different hands in the economy, is decreased. This lowered the rate of growth. Spending should, therefore, target public works programs on a large enough scale to speed up growth to its previous levels.

Demand changes as the price increases. That’s called the law of demand. It says people will want more goods and services when prices fall. They will buy less as prices increase. The law of demand assumes the other determinants of demand don’t change. The other determinants are income, prices of related goods or services (whether complementary or substitutes), tastes, and expectations. The sixth determinant that only affects aggregate demand is the number of buyers in the economy.

Aggregate Demand represents the total demand for goods and services at any given price level in a given period. Aggregate demand over the long-term equals gross domestic product (GDP) because the two metrics are calculated in the same way. GDP represents the total amount of goods and services produced in an economy while aggregate demand is the demand or desire for those goods. As a result of the same calculation methods, the aggregate demand and GDP increase or decrease together.

Technically speaking, aggregate demand only equals GDP in the long run after adjusting for the price level. This is because short-run aggregate demand measures total output for a single nominal price level whereby nominal is not adjusted for inflation. Other variations in calculations can occur depending on the methodologies used and the various components.

Aggregate demand consists of all consumer goods, capital goods (factories and equipment), exports, imports, and government spending programs. The variables are all considered equal as long as they trade at the same market value. 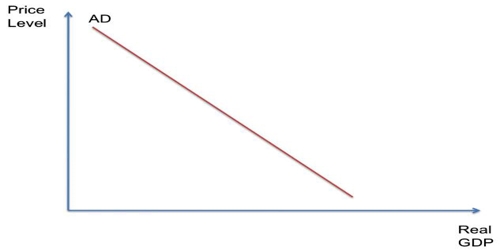 (The aggregate demand curve says that real GDP will decline when prices rise.)

The aggregate demand curve illustrates the relationship between two factors: the quantity of output that is demanded and the aggregate price level. Aggregate demand is expressed contingent upon a fixed level of the nominal money supply. There are many factors that can shift the AD curve. Rightward shifts result from increases in the money supply, in government expenditure, or in autonomous components of investment or consumption spending, or from decreases in taxes.

The equation for aggregate demand adds the amount of consumer spending, private investment, government spending, and the net of exports and imports. The formula is shown as follows: AD = C + I + G + Nx

The aggregate demand formula above is also used by the Bureau of Economic Analysis to measure GDP in the U.S.

Everything purchased in a country is the same thing as everything produced in a country. As a result, aggregate demand equals the gross domestic product of that economy. These are the same as the components of GDP.

Investment spending by business. It only includes purchases of equipment, buildings, and inventory.

Government spending on goods and services. It does not include transfer payments, such as Social Security, Medicare, and Medicaid. They aren’t included because they don’t increase demand. These programs shift demand from one group (taxpayers) to another (beneficiaries).

Exports, that’s demand from other countries.

Austrian theorist Henry Hazlitt argued that aggregate demand is “a meaningless concept” in economic analysis. Friedrich Hayek, another Austrian, wrote that Keynes’ study of the aggregate relations in an economy is “fallacious”, arguing that recessions are caused by micro-economic factors.