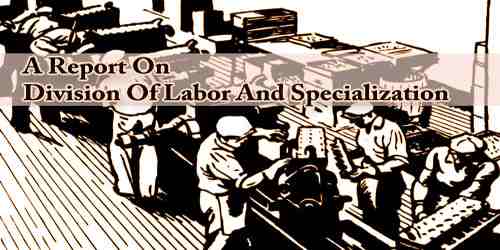 A Report On Division Of Labor And Specialization

Division of Labor is the separation of tasks in any economic system so that participants may specialize (specialization). Individuals, organizations, and nations are endowed with or acquire specialized capabilities and either form combinations or trade to take advantage of the capabilities of others in addition to their own. Specialized capabilities may include equipment or natural resources in addition to skills and training and complex combinations of such assets are often important, as when multiple items of specialized equipment and skilled operators are used to produce a single product. The division of labor is the motive for trade and the source of economic interdependence.

Division of Labor is one of the most important concepts in social science, not just for economics but for the study of societies in general. Many scholars, such as Ibn Kalduhn in the 14th century, or Emile Durkheim in the 20th, have considered the importance of division of labor for how societies function. But Adam Smith’s discussion in The Wealth of Nations united two key concepts: division of labor as a motor for generating prosperity, and market systems based on self-interest as a fuel for that motor.

It is most often applied to systems of mass production and is one of the basic organizing principles of the assembly line. Breaking down work into simple repetitive tasks eliminates unnecessary motion and limits the handling of different tools and parts. The consequent reduction in production time and the ability to replace craftsmen with lower-paid unskilled workers result in lower production costs and a less expensive final product.

After the Neolithic Revolution, pastoralism and agriculture led to more reliable and abundant food supplies, which increased the population and led to specialization of labor, including new classes of artisans, warriors, and the development of elites. This specialization was furthered by the process of industrialization, and Industrial Revolution-era factories. Accordingly many classical economists as well as some mechanical engineers such as Charles Babbage were proponents of division of labor. Also, having workers perform single or limited tasks eliminated the long training period required to train craftsmen, who were replaced with lesser paid but more productive unskilled workers.

Contrary to popular belief, however, division of labor does not necessarily lead to a decrease in skills known as proletarianization among the working population. The Scottish economist Adam Smith saw this splitting of tasks as a key to economic progress by providing a cheaper and more efficient means of producing goods.

Historically, an increasing division of labor is associated with the growth of total output and trade, the rise of capitalism, and the increasing complexity of industrialized processes. The concept and implementation of division of labor has been observed in ancient Sumerian (Mesopotamian) culture, where assignment of jobs in some cities coincided with an increase in trade and economic interdependence. Division of labor generally also increases both producer and individual worker productivity.

The formal study of economics began when Adam Smith (1723-1790) published his famous book, The Wealth of Nations, in 1776. Many authors had written about economics in the centuries before Smith, but he was the first to address the subject in a comprehensive way.

In the first chapter of the book, Smith introduces the idea of the division of labor, which means that the way a good or service is produced is divided into a number of tasks that are performed by different workers, instead of all the tasks being performed by the same person. To illustrate the division of labor, Smith counted how many tasks were involved in making a pin: drawing out a piece of wire, cutting it to the right length, straightening it, putting a head on one end and a point on the other, packaging pins for sale, and so on. Smith counted eighteen distinct tasks that were typically performed by different people all for a pin!

The French scholar Émile Durkheim first used the phrase division of labor in a sociological sense in his discussion of social evolution. Rather than viewing division of labor as a consequence of a desire for material abundance, Durkheim stated that specialization arose from changes in social structure caused by an assumed natural increase in the size and density of population and a corresponding increase in competition for survival. Division of labor functioned to keep societies from breaking apart under these conditions.

The main cause of prosperity, argued Smith, was increasing division of labor. Smith gave the famous example of pins. In his study of pin factories, Smith observed that one worker alone might make twenty pins in a day, but that a small business of ten workers (some of whom would need to do two or three of the eighteen tasks involved in pin making), could make forty-eight thousand pins in a day. How can a group of workers, each specializing in certain tasks, produce so much more than the same number of workers who try to produce the entire good or service by themselves? Smith offered three reasons.

First, specialization in a particular small job allows workers to focus on the parts of the production process in which they have an advantage. People have different skills, talents, and interests, so they will be better at some jobs than at others. The particular advantages may be based on educational choices, which are shaped, in turn, by interests and talents. Only those with medical training qualify to become doctors, for instance. For some goods, the specialization will be affected by geography it’s easier to be a wheat farmer in North Dakota than in Florida, but easier to run a tourist hotel in Florida than in North Dakota. If you live in or near a big city, it’s easier to attract enough customers to operate a successful dry-cleaning business or movie theater than if you live in a sparsely populated rural area. Whatever the reason, if people specialize in the production of what they do best, they will be more productive than if they produce a combination of things, some of which they are good at and some of which they are not.

Second, workers who specialize in certain tasks often learn to produce more quickly and with higher quality. This pattern holds true for many workers, including assembly-line laborers who build cars, stylists who cut hair, and doctors who perform heart surgery. In fact, specialized workers often know their jobs well enough to suggest innovative ways to do their work faster and better. A similar pattern often operates within businesses. In many cases, a business that focuses on one or a few products is more successful than firms that try to make a wide range of products.

Third, specialization allows businesses to take advantage of economies of scale, which means that, for many goods, as the level of production increases, the average cost of producing each individual unit declines. For example, if a factory produces only one hundred cars per year, each car will be quite expensive to make on average. However, if a factory produces fifty thousand cars each year, then it can set up an assembly line with huge machines and workers performing specialized tasks, and the average cost of production per car will drop. Economies of scale implies that production is becoming more efficient as the scale of production rises.

The intensive specialization in industrial societies the refinement and simplification of tasks (especially associated with a machine technology) so that a worker often produces only a small part of a particular commodity is not usually found in non-industrialized societies. There is rarely a division of labor within an industry in non-literate communities, except perhaps for the production of larger goods (such as houses or canoes); in these cases, the division is often a temporary one, and each worker is competent to perform other phases of the task. There may be some specialization in types of products (e.g., one worker may produce pottery for religious uses; another, pottery for ordinary uses), but each worker usually performs all steps of the process.