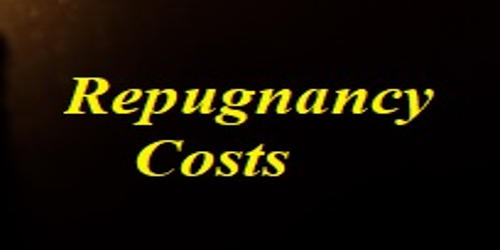 A repugnant condition is one contrary to the contract itself. Repugnancy could be defined as “an inconsistency or contradiction between two or more parts of a legal instrument (such as a statute or a contract). Repugnancy costs are costs borne by an individual or entity as a result of a stimulus that goes against that individual or entity’s cultural mores. The cost could be emotional, physical, mental, or figurative. The stimulus could be anything from food to people to an idea. Perhaps a key idea in understanding repugnant transactions is to map repugnancy as a social preference model in which an outsider who is not counterparty in the transaction finds it necessary to prevent the transaction in order to maximize his private utility.

Repugnant transactions seem to follow both arrows of time, in that certain transactions, such as cadavers for anatomical study, short selling, and life insurance were once considered repugnant but are no longer. These costs are perspective-dependent and individual. These costs may be different for different groups of people; countries, states, ethnicities, etc. The term allows for a clear and understandable way of representing the concept of contextual stigma in a literal and applicable sense. Meanwhile, other transactions, such as the use of mercenary soldiers, indentured servitude, debtor’s prison, sale of indulgences, and ecclesiastical offices were once considered acceptable but are now repugnant.

Societies prohibit many transactions considered morally repugnant, although potentially efficiency-enhancing. The term wisdom of repugnance describes the belief that an intuitive (or “deep-seated”) negative response to something, idea, or practice should be interpreted as evidence for the intrinsically harmful or evil character of that thing. Examples include prostitution, commercial surrogacy, selling human eggs or plasma, as well as the trade of certain types of meat, and pricing practices for certain products.

Repugnancy costs were first mentioned in a debate between Alvin Roth and Julio Elias on whether there should be an official market for kidneys. Roth (2007) presents the case of buying and selling horsemeat for human consumption in California as an example of a repugnant transaction. Roth offers many examples of repugnant markets like insurance products for children & old, gambling and betting markets, adoption, etc. The act of buying and selling organs may be against one’s cultural mores; it may be repugnant. Then he shows how it leads to problems in market design and how he tried to solve them in some cases. Hence, this is an additional cost one must bear if such a market was deemed repugnant in the context of one’s culture.