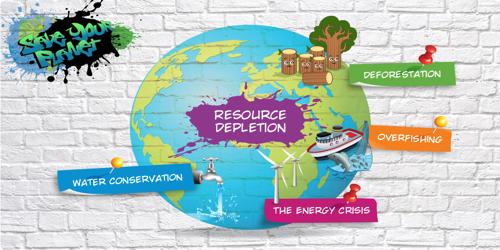 All of these things deplete or degrade the earth’s natural resources. Resource depletion is the consumption of a resource faster than it can be replenished. Natural resources are separated into two categories: renewable sources and non-renewable sources. Resource depletion is most commonly used in reference to farming, fishing, mining, water usage, and consumption of fossil fuels.

It is estimated that humanities’ eco-footprint (a measure of consumption) is one and a half times the earth’s ability to sustainably provide the resources to meet that level of consumption. That shortfall is being met through the depletion (or degradation) of natural capital – things like fresh water, soil, forest land, wetlands and biodiversity.

The main causes of resource depletion are overuse or irrational use, non-equitable use of resources, technological and industrial development and population growth. Peoples are exploiting non-renewable resources at a very fast speed to meet the increasing demands for economic and industrial growth.

The impacts of resource depletion are an imbalance in nature, a shortage of materials, the struggle for human life and slackening of economic growth.

Our natural resources bring a balance in the environment and make it stable. Increasing deforestation and other terrible acts has greatly affected the balance in nature.

Indiscriminate use of resources has caused shortage of material. Many materials that we used to get from forest are in short supply because forests have been cleaned for making cities, roads, dams etc.

A struggle for existence is taking place between different countries, between the neighboring states of one country, so they can take the natural resources of that area.