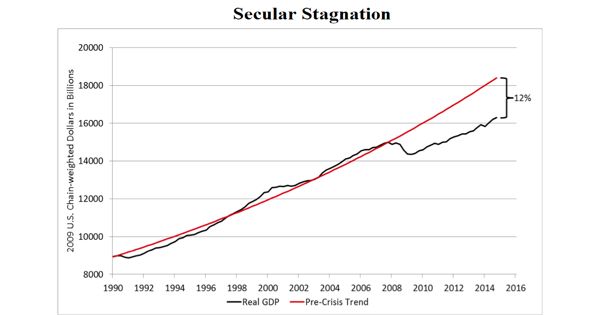 A secular market is a market that is driven by forces that could be in place for many years, causing the price of a particular investment or asset class to rise or fall over a long period. The term “secular stagnation” refers to a state of little or no economic growth – in other words, an environment where the economy is essentially stagnant. In economics, it is a situation when there is negligible or no economic growth in a market-based economy. “Secular” in this context simply means “long term.” However, an economy facing secular stagnation may require an interest rate below zero to bring savings and investment into balance.

Secular stagnation is the idea that an economy has slowed down not because of this business cycle but because of structural, permanent problems. The term was coined by Alvin Hansen in the 1930s, during the Great Depression, and was revived largely by Lawrence Summers. The idea of secular stagnation dates back to the Great Depression, when some economists feared that the United States had permanently entered a period of low growth. The theory of secular stagnation was first put forward in the 1930s, during the Great Depression, and more recently revived by economist Lawrence Summers, who served as an economic advisor in both the Clinton and Obama administrations. In this situation the economy can’t begin to grow again without artificial intervention from the government.

Secular stagnation is a situation where the private sector of an economy has a tendency to save a great deal and a limited propensity to invest, so that there’s all this cash that needs to be absorbed and trouble in absorbing it. The primary tenets of the theory are that the lack of investing, due to an increased tendency toward saving, and the lack of an aggressive (i.e., high spending) government fiscal policy are the primary causes of a state of economic stagnation, where there is little discernible economic growth. The surplus of savings over investment may be generating price appreciation in financial assets or real estate.

So, Secular Stagnation is a prolonged period in which satisfactory growth can only be achieved by unsustainable financial conditions –may be the defining macro-economic challenge of our times. Opponents of the secular stagnation theory argue that the theory’s alleged condition of exaggerated saving is largely a myth and that the true culprit holding down economic growth is increased government regulation and fiscal intervention. However, an economy facing secular stagnation behaves as if it is operating below capacity, even when the economy appears to be booming; inflation does not appear.