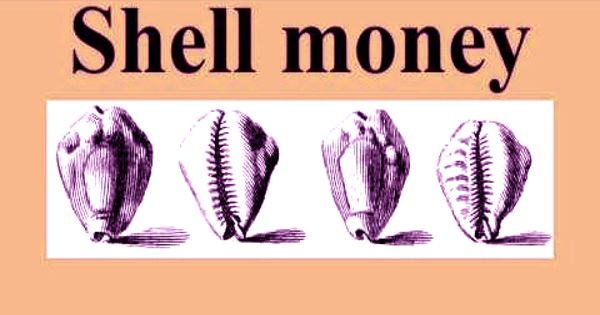 Shell money is a medium of exchange similar to coin money and other forms of commodity money and was once commonly used in many parts of the world. It is a medium of exchange consisting of shells, the most widely distributed type of ancient currency. The combination of shell and money is therefore very old and many shells, or rather parts thereof, were assembled to form necklaces and belts having a certain monetary value.

Shell money usually consisted of whole or partial seashells, often worked into beads or otherwise shaped. Shells are particularly useful as money because they may be strung in long strips of proportionate value or they may be used to provide a single unit value in exchange. The use of shells in trade began as a direct commodity exchange, the shells having value as body ornamentation. Shells ultimately derived their value from their use as jewelry and in rituals. The distinction between beads as commodities and beads as money has been the subject of debate among economic anthropologists. The relative scarcity of the type of shell used or the way the shell is fashioned often determines its value.

Shell money has appeared in the Americas, Asia, Africa, and Australia. It is a medium of exchange consisting of shells. The most familiar form may be the wampum created by the Indigenous peoples of the East Coast of North America, ground beads cut from the purple part of marine bivalve shells. The shell most widely used worldwide as currency was the shell of Cypraea moneta, the money cowry. This species is most abundant in the Indian Ocean and was collected in the Maldive Islands, in Sri Lanka, along the Malabar coast, in Borneo and on other East Indian islands, and in various parts of the African coast from Ras Hafun to Mozambique. Cowry shell money was an important part of the trade networks of Africa, South Asia, and East Asia. The profile of a cowry, a shell always linked to the concept of money, appeared on the first coins of the Western world around the 5th -4th century BC. Shells have been used for at least four millennia as a bargaining chip in China and Europe, and when metal coins became popular, they were often reproduced on them.