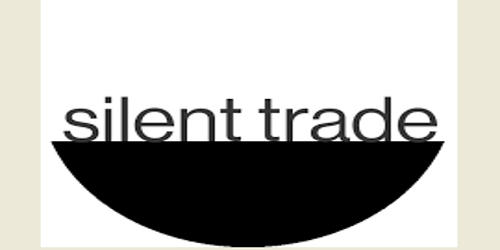 Silent trade, also called silent barter, dumb barter, or depot trade, is a method by which traders who cannot speak each other’s language can trade without talking. It is a specialized form of barter in which goods are exchanged without any direct contact between the traders. Group A would leave trade goods in a prominent position and signal, by gong, fire, or drum for example, that they had left goods. Generally, one group goes to a customary spot, deposits the goods to be traded, and withdraws, sometimes giving a signal such as a call or a gong stroke. Group B would then arrive at the spot, examine the goods, and deposit their trade goods or money that they wanted to exchange and withdraw. Another group then comes to leave the second set of articles and retreats.

Group A would then return and either accept the trade by taking the goods from Group B or withdraw again leaving Group B to add to or change out items to create equal value. The first group returns, removing these new goods if satisfied or leaving them until additions are made. The trade ends when Group A accepts Group B’s offer and removes the offered goods leaving Group B to remove the original goods. The second group then takes the original wares to conclude the transaction.

This system was used in many parts of ancient Africa. The classical description of silent trade comes from the works of Herodotus, who mentioned the exchanges of goods between the Carthaginians and peoples of the west coast of Africa. Silent trading was mainly used during the period 500 to 1500. The practice was also well established between tribes in Africa in their trade with India. Cosmas Indicopleustes describes this practiced in Azania, where officials from Axum traded for gold with beef. Prince Henry the Navigator of Portugal recorded this practice when he occupied Ceuta in 1415. This widespread institution has also been reported from Siberia, Lapland, west Africa, Timor, Sumatra, India, Sri Lanka, and New Guinea.

Silent trade might be used because of an inability to speak the other traders’ language or to protect the secrets of where the valuable gold and salt came from. It is often a response to difficulties in communication due to language barriers or to inequality of cultural advancement between neighboring peoples.

Silent bartering has been used since ancient times, such as the ancient Ghana Empire. It is a system of bartering in which traders remain silent, either because they have no language in common or because they both wish to keep secret and not discuss the origins of their goods. The Ghanaian salt traders would leave pounds of salt by the Niger River and the gold traders would leave a fair amount of gold in turn.