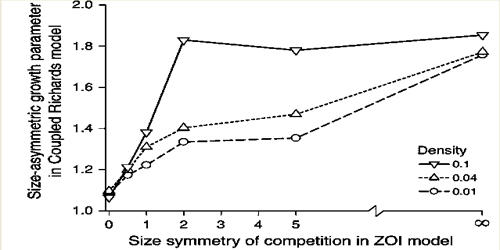 Size-asymmetric competition among plants is usually defined as resource pre-emption by larger individuals, but it is usually observed and measured as a disproportionate size advantage in the growth of larger individuals in crowded populations. There is much evidence that plant competition below ground is size symmetric, i.e. that competing plants share contested resources in proportion to their sizes. This type of competition is common among plants but also exists among animals. Size-asymmetric growth can be strong evidence that competitive mechanisms are at least partially size asymmetric, but the degree of size-asymmetric growth is influenced by the intensity as well as the mode of competition.