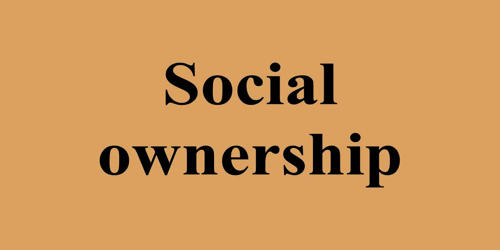 The two major forms of social ownership are society-wide public ownership and cooperative ownership. The distinction between these two forms lies in the distribution of the surplus product. Furthermore, everything that people produce is in some sense a social product, and everyone who contributes to the production of a good is entitled to a share in it. Social democracy is a kind of capitalism that tries to mix parts of socialism with capitalism. In social democracies, some services and industries are subsidized (given money to help them run), or partly controlled by the government, or both. For example, education, health care, housing, utility companies, and public transportation are some industries that might be owned/supported by the government in a social democracy.

Society as a whole, therefore, should own or at least control property for the benefit of all its members. Social Ownership is a form of collective ownership in which the control and organization of an industry, company, etc., are shared, especially by its workers or by the community at large. The goal of social ownership is to eliminate the distinction between the class of private owners who are the recipients of passive property income and workers who are the recipients of labor income (wages, salaries, and commissions), so that the surplus product (or economic profits in the case of market socialism) belong either to society as a whole or to the members of a given enterprise. Socialism is an economic and political system. It is an economic theory of social organization. It believes that the means of making, moving, and trading wealth should be owned or controlled by the workers. Social ownership would enable productivity gains from labor automation to progressively reduce the average length of the working day instead of creating job insecurity and unemployment.