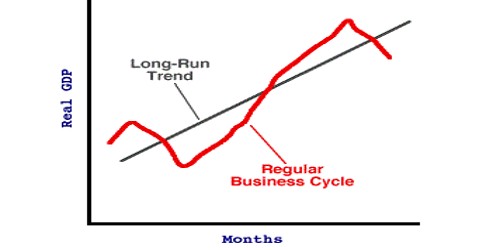 A stabilization policy is a package or set of measures introduced to stabilize a financial system or economy. It is a policy enacted by a government or its central bank that is aimed at maintaining a healthy level of financial expansion and minimum price changes. The term can refer to policies in two dissimilar sets of circumstances: business cycle stabilization or credit cycle stabilization. In the language of business news, a stabilization policy is designed to prevent the economy from excessive “over-heating” or “slowing down.” In either case, it is a form of discretionary policy.

“Stabilization” can refer to correcting the normal behavior of the business cycle, thus enhancing economic stability. Sustaining a stabilization policy requires monitoring the business cycle and adjusting benchmark interest rates as needed to control abrupt changes in demand. In this case, the term generally refers to demand management by monetary and fiscal policy to reduce normal fluctuations and output, sometimes referred to as “keeping the economy on an even keel.”

Even when both sides agree something needs to be done, different ideas about the size and functions of government can cause differences in the choice of tax changes or changes in spending as the means of stimulating or slowing the economy leading to policy gridlock. The policy changes in these circumstances are typically countercyclical, compensating for the predicted changes in employment and output, to increase short-run and intermediate run welfare.

Economic stabilization policies are macroeconomic policies implemented by governments and central banks in an attempt to keep economic growth stable and less volatile. The point is that stabilization policy – changes in taxes or changes in government spending – does not necessarily change the size of government in any particular direction, which is a policy choice. Policymakers carefully monitor the business cycle and make adjustments to fiscal and monetary policy in an attempt to create stable and sustainable growth and reduce the damage caused by downturns. Traditionally stabilization policy maintains a constant budget balance in the long-run and whether to use tax changes or spending changes is a matter of effectiveness, not a matter of ideology about the size of government.