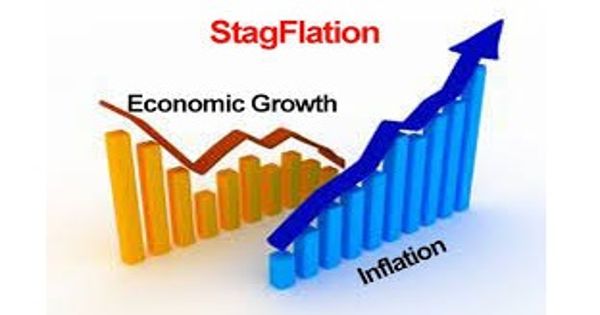 Stagflation is a combination of stagnant economic growth, high unemployment, and high inflation. There is no consensus among economists on the causes of stagflation. It’s an unnatural situation because inflation is not supposed to occur in a weak economy. The supply shock theory suggests that stagflation occurs when an economy faces a sudden increase or decrease in the supply of a commodity or service, such as a rapid increase in the price of oil.

Stagflation was first recognized during the 1970s, where many developed economies experienced rapid inflation and high unemployment as a result of an oil shock. People may talk about stagflation if there is a rise in inflation and a fall in the growth rate. Stagflation can also be alternatively defined as a period of inflation combined with a decline in the gross domestic product (GDP). This is less damaging than higher inflation and negative growth. But, it still represents a deterioration in the trade-off between unemployment and inflation. Economists and policymakers generally assume that prices will rise, and largely focus on accelerating and decelerating inflation rather than inflation itself.