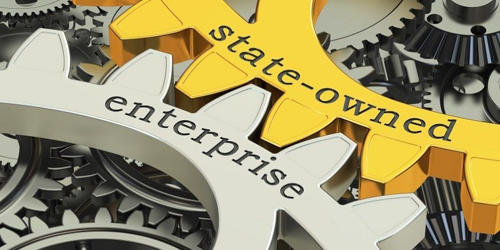 State-owned enterprises (SOEs) are an important element of most economies, including many more advanced economies. An SOE or government-owned enterprise (GOE) is a business enterprise where the government or state has significant control through full, majority, or significant minority ownership. It is a large organization created by a country’s government to carry out commercial activities. Defining characteristics of SOEs are their distinct legal form and operation in commercial affairs and activities. Under the SOE Guidelines, SOEs are ultimately owned by the general public and the government agencies who exercise the ownership rights are answerable to the general public.

It is a legal entity that is created by a government in order to partake in commercial activities on the government’s behalf. While they may also have public policy objectives, SOEs should be differentiated from government agencies or state entities established to pursue purely nonfinancial objectives. It can be either wholly or partially owned by a government and is typically earmarked to participate in specific commercial activities. SOEs are most prevalent in strategic sectors such as energy, minerals, infrastructure, other utilities, and, in some countries, financial services.

SOEs are common with natural monopolies because they allow capturing economies of scale while they can simultaneously achieve a public objective. In most countries with an abundant supply of resources, the state usually owns a stake in minerals, oil, and gas produced locally. For that reason, SOEs primarily operates in the domain of infrastructure, strategic goods and services, natural resources and energy (e.g. nuclear facilities, alternative energy delivery), politically sensitive business, broadcasting, banking, demerit goods (e.g. alcoholic beverages), and merit goods (healthcare). The resources are accrued because a state-owned enterprise owns or operates shares through what is known as an operating license.

SOEs can also help foster industries that are “considered economically desirable and that would otherwise not be developed through private investments”. When nascent or ‘infant’ industries have difficulty getting investments from the private sector (perhaps because the good that is being produced requires very risky investments, when patenting is difficult, or when spillover effects exist), the government can help these industries get on the market with positive economic effects. In many countries, the management of state resources such as oil and gas is a preserve of SOEs, because it provides an avenue through which the government can be held accountable on matters involving extractive resources.

SOEs are also frequently employed in areas where the government wants to levy user fees but finds it politically difficult to introduce new taxation. Next, SOEs can be used to improve the efficiency of public service delivery or as a step towards (partial) privatization or hybridization. For that reason, they are required to abide by all the regulations and laws governing their operation and conduct. Otherwise, the law will hold them liable for any irresponsible actions.