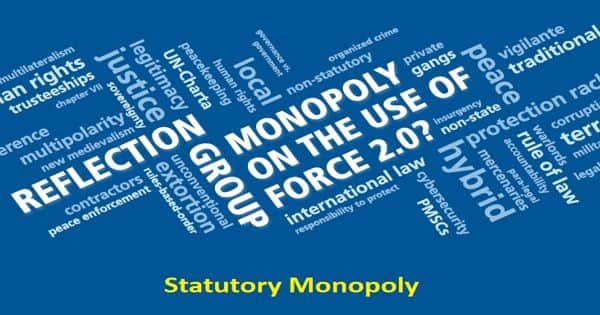 A legal monopoly, statutory monopoly, or de jure monopoly is a monopoly that is protected by law from the competition. It is a firm that is protected by law from competitors. In other words, a legal monopoly is a firm that receives a government mandate to operate as a monopoly. It can either be independently run and government regulated, or both government-run and government regulated. Instead of allowing free market forces to produce a dominating winner, the government picks a strong firm. Then, strict oversight is provided to ensure that the firm in question is not abusing its status as a legal monopoly.

Statutory Monopoly is the type of monopoly is usually contrasted with a de facto monopoly which is a broad category for monopolies that are not created by the government.

A statutory monopoly is a situation in which the government grants a firm to be the exclusive provider of a good and/or service in exchange for the right to be monitored and regulated. It may take the form of a government monopoly where the state owns the particular means of production or a government-granted monopoly where private interest is protected from competition such as being granted exclusive rights to offer a particular service in a specific region (e.g. patented inventions) while agreeing to have their policies and prices regulated. In a legal monopoly, the government is able to regulate prices and provide the population with widely accessible services/goods, oversee firm operations, and ideally shift the monopoly to act in the best interest of consumers. Characteristics associated with a monopoly market make the single seller the market controller as well as the price maker.

These are often heavily regulated and may have their rates and charges set by the government, at least within certain limits. The government may run the monopoly directly or contract it out to private companies; it also usually prohibits competition. This type of monopoly is usually contrasted with a de facto monopoly which is a broad category for monopolies that are not created by the government. These arise when a government deems that allowing a single firm as the sole service (or product) provider would be in the best interest of citizens.

Monopolies don’t need to innovate on their products/services or provide exceptional customer service as there are no competitors in the marketplace. It is a monopoly protected by law from entry by rivals. Such monopolies are sometimes set up as a quid pro quo for an obligation to provide a universal service; the UK Post Office is an example of this.