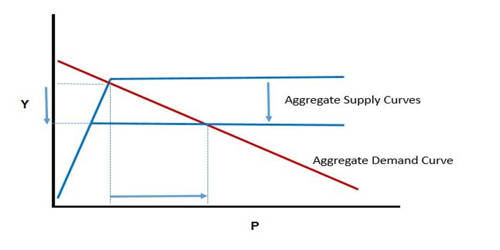 A supply shock is an event that suddenly increases or decreases the supply of a commodity or service, or of commodities and services in general. Shocks are events that are by and large unexpected and bring out changes in real economic growth, inflation, and unemployment. This sudden change affects the equilibrium price of the good or service or the economy’s general price level. It is an unexpected event that suddenly changes the supply of a product or commodity, resulting in an unforeseen change in price. All countries are exposed to some degree to external economic shocks. It’s important to understand that the market’s perception of future supply is very important in the creation of a supply shock. These shocks differ in important ways from negative demand shocks, where consumers cut their spending even as prices fall. These are also increasingly important in Keynesian and neo-classical models of the business cycle.

In the short run, an economy-wide negative supply shock will shift the aggregate supply curve leftward, decreasing the output and increasing the price level. There is evidence that lower and middle-income developing nations are more vulnerable partly because they have a less diversified economy with a narrow range of production and export industries. For example, the imposition of an embargo on trade in oil would cause an adverse supply shock, since oil is a key factor of production for a wide variety of goods. A supply shock can cause stagflation due to a combination of rising prices and falling output. The effects of external shocks depend in part on what type of exchange rate system a country has chosen to use.

In the short run, an economy-wide positive supply shock will shift the aggregate supply curve rightward, increasing output and decreasing the price level. It can be created by any unexpected event that constrains output or disrupts the supply chain, including natural disasters and geopolitical developments such as acts of war or terrorism. A positive supply shock could be an advance in technology (a technology shock) which makes production more efficient, thus increasing output. A positive supply shock increases output causing prices to decrease, while a negative supply shock decreases output causing prices to increase. For example – Crude oil is a commodity that is considered vulnerable to negative supply shocks due to its volatile Middle East location. The impact of the shock is unique to each specific event, although consumers are typically the most affected.