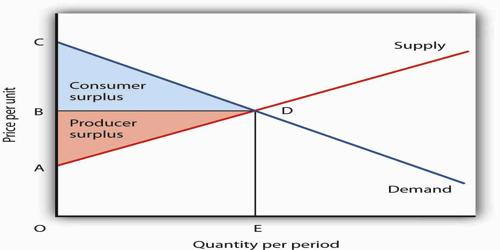 The concept of consumer’s surplus is one of the most important idea in economic theory especially in demand and welfare economics. It is a measure of the welfare that people gain from consuming goods and services. It is important for small businesses to consider, because consumers that derive a large benefit from buying products are more likely to purchase them again in the future.

This law was first developed by French engineer A.J Dupuit in 1844 to measure the social benefits of public commodities like canals, bridges, national highways, etc. This concept was further refined and popularized by Dr. Alfred Marshall in 1890. This concept is used to explain the gap between total utility that a consumer gets from the consumption of a certain commodity and the total money value which he actually pays for the same.

It is defined as the difference between the consumers’ willingness to pay for a commodity and the actual price paid by them, or the equilibrium price. The essence of the concept of consumer’s surplus is that people generally get more satisfaction or utility from the consumption of commodities than the actual price they pay for them. It has been found that people are willing to pay more price for the commodity than they actually pay for them. This extra satisfaction which the consumers obtain from buying a commodity has been called consumer’s surplus by Marshall.

The total utility which a person will get from a commodity will be given by the sum of marginal utilities of the units of commodities purchased or the total price which he actually pays equal to the price per unit multiplied by the number of units purchased. Thus,

Consumer’s surplus = what a consumer is prepared to pay minus what he actually pays. Description: Total social surplus is composed of consumer surplus and producer surplus. It is a measure of consumer satisfaction in terms of utility.

Graphically, it can be determined as the area below the demand curve (which represents the consumer’s willingness to pay for a good at different prices) and above the price line. It reflects the benefit gained from the transaction based on the value the consumer places on the good. It is positive when what the consumer is willing to pay for the commodity is greater than the actual price.

Consumer surplus is infinite when the demand curve is inelastic and zero in case of a perfectly elastic demand curve.