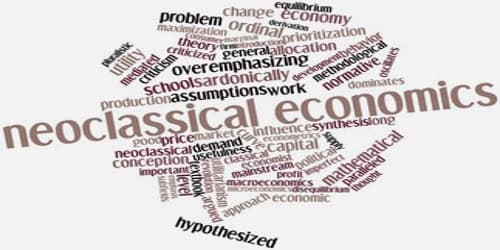 Neoclassical economic theory is grounded in the rejection of the Marxian notion of exploitation and the promotion of the idea that the distribution of social resources produced by market exchanges is innately fair and just (when it is allowed to work “without friction.”) Although neoclassical theory dominates the economics discipline it is actually a psychological theory: at the core of the theory is a specific reductionist theory of human decision making and rationality that is then applied to economic (and other) phenomena. All human decision making is assumed to be driven by the pursuit of individual pleasure/happiness. This pleasure is defined, within the theory, as utility.

One of the most important tenets of the neoclassical theory is that consumers often perceive a product as being more valuable than the cost of production, thus affecting demand for the product.

Another tenet of neoclassical theory is that economic choices are often made based on the likelihood that an economic option will turn out to be lucrative or valuable in the future.

Neoclassical economics, as its name implies, developed from the classical economics dominant in the eighteenth and nineteenth centuries. Its beginning can be traced to the Marginal revolution of the 1860s, which brought the concept of utility as the key factor in determining value in contrast to the classical view that the costs involved in production were value’s determinant.

Markets will ‘reach equilibrium’ if all the sellers who want to sell at or below a given price have sold to all the buyers who are willing to buy at or above a given price. The price is worked out in the market.

Neoclassical economics conceptualizes the agents as rational actors. Agents were modeled as optimizers who were led to “better” outcomes. Neoclassical economists usually assume, in other words, that human beings make the choices that give them the best possible advantage, given the circumstances they face. Circumstances include the prices of resources, goods and services, limited income, limited technology for transforming resources into goods and services, and taxes, regulations, and similar objective limitations on the choices they may make (Weintraub 1993).

Neoclassical theory has maintained its dominant position despite attacks upon its underlying assumptions from a wide range of perspectives and analyses, from the Cambridge critique and the work of Pierro Sraffa to the work of behavioural psychologists (such as Kahneman and Tversky, who received Nobel Prizes in economics), economists (such as Robert Schiller, who also earned a Nobel Prize in economics), and others (such as the noted philosophy-hedge fund billionaire George Soros) who have demonstrated that human behaviour and the behaviour of markets is not in accordance with the neoclassical notion of rationality.