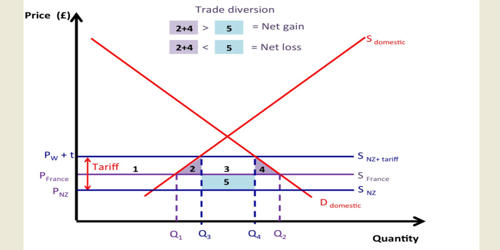 Trade diversion is an economic term related to international economics in which trade is diverted from a more efficient exporter towards a less efficient one by the formation of a free trade agreement or a customs union. It is a shift in international trade caused by one nation giving trade preferences to another, resulting in a decline in trade with a third country. The total cost of goods becomes cheaper when trading within the agreement because of the low tariff. This is as compared to trading with countries outside the agreement with lower-cost goods but higher tariff. In general, trade diversion means that a free trade area diverts trade, away from a more efficient supplier outside the FTA, towards a less efficient supplier within the FTA.

Trade diversion may occur when a country joins a free trade area with a common external tariff. The related term Trade creation is when the formation of a trade agreement between countries decreases the price of the goods for more consumers and therefore increases overall trade. In some cases, trade diversion will reduce a country’s national welfare but in some cases, national welfare could improve despite the trade diversion. In this case, the more efficient producer with the agreement increases trade. The terms were used by ‘old’ Chicago School economist Jacob Viner in his 1950 paper The Customs Union Issue.