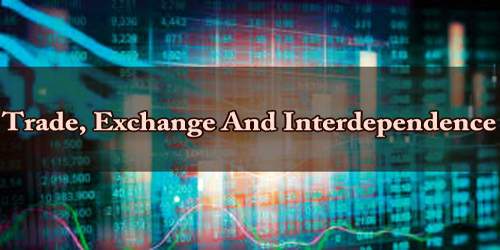 Free market is a summary term for an array of exchanges that take place in society. Each exchange is undertaken as a voluntary agreement between two people or between groups of people represented by agents. These two individuals (or agents) exchange two economic goods, either tangible commodities or nontangible services.

Usually, people or civilizations trade things that they have too much of for things that they don’t have enough of (pencils/pens). A network that allows trade is called a market. The advent of money as a medium of exchange has allowed trade to be conducted in a manner that is much simpler and effective compared to earlier forms of trade, such as bartering.

Everyone specializes to some degree in what he or she produces, and then trades with others to obtain many of the goods and services he or she consumes.

Trade can take place within an economy between producers and consumers. International trade allows countries to expand markets for both goods and services that otherwise may not have been available to it. It is the reason why an American consumer can pick between a Japanese, German, or American car. As a result of international trade, the market contains greater competition and therefore, more competitive prices, which brings a cheaper product home to the consumer.

Money occupies a central role in market economies because it acts as a medium of exchange. The arrival of money replaced the need for exchange through barter. To be able to consume, individuals need to exchange their skill and effort, or their enterprise, land or capital, for an income. They can then exchange this income for the scarce products they need or want. Through exchange, consumption is satisfied by a process called production.

The core function of an exchange is to ensure fair and orderly trading and the efficient dissemination of price information for any securities trading on that exchange. Exchanges give companies, governments, and other groups a platform from which to sell securities to the investing public.

Economic interdependence is a consequence of specialization or the division of labor. The participants in any economic system must belong to a trading network to obtain the products they cannot produce efficiently for themselves. Any change in such a network affects many participants, so that the demands for various products and the incomes of the participants are interdependent.

A. A. Cournot wrote in Mathematical Researches into the theory of Wealth “…the economic system is a whole in which all of the parts are connected and react on one another. An increase in the income of the producers of commodity A will affect the demand for commodities B, C, etc. and the incomes of their producers, and by their reaction will affect the demand for commodity A.” Such complex reactions are evident in general equilibrium theory.

People do not produce all the goods and services they consume. Instead, they produce a narrower range of goods and services and then trade (exchange) with others to help satisfy their economic wants. Both parties expect to benefit from a voluntary trade; there are no “winners” and “losers.” This is why both buyers and sellers often say “Thank you!” after a purchase.

Money is any asset that is acceptable in the settlement of a debt incurred in an exchange. For an asset to be widely used as money, it must have certain properties, including that the asset is portable, divisible, durable and stable in value. Some assets fulfill the role of money much better than other ones.