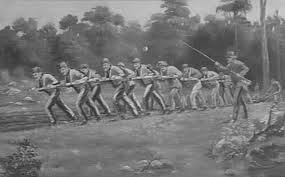 Unfree labour is a cooperative term for those work relations, particularly in present or early modern history, in which people are engaged against their will by the risk of detention, violence, lawful obligation or other extreme hardship to themselves or to members of their families. Unfree labour includes all forms of slavery and associated associations. Many of these forms of job may be enclosed by the term forced labour, which is defined by the International Labour Organization as all instinctive work exacted under the threat of punishment.