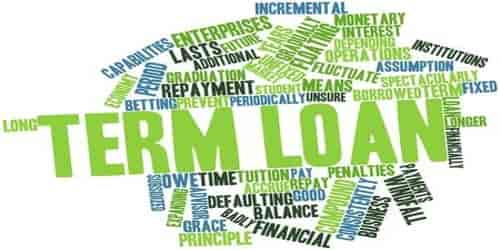 A term loan is a loan from financial institutions having an initial maturity of more than one year. A term loan is a contract under which a borrower agrees to make a series of interest and principal payments in an interval of specific period. Generally, term-loans have maturities of 5 to 10 years. It usually lasts between one and ten years, but may last as long as 30 years in some cases.

Term loans have some specific advantages over public offerings. The term loan has many advantages over the other short-term loans or business loans which are mentioned here. It can be raised in a relatively short period because term loans are negotiated directly between the lender and the borrower, and documentation is minimized. But the public offering of long-term securities involves a lengthy process. is a short-term financing option used by companies to purchase various assets. Another advantage of the term loan is flexibility. Terms and conditions of term loan can be revised on by mutual agreement between the lender and borrower. Another advantage of the term loan is lower issuance costs. Firms can avoid flotation costs such as underwriting fee, commission, printing charges of the certificate, advertisement cost etc. Advantages of Term Loan –