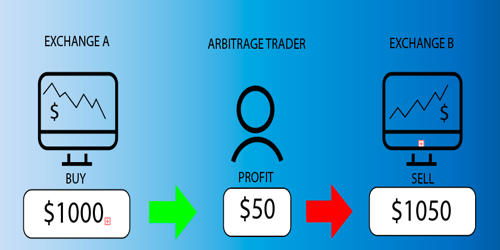 Arbitrage happens when a security is purchased in one market and simultaneously sold in another at a higher price. In economics and finance, arbitrage is the practice of taking advantage of a price difference between two or more markets: striking a combination of matching deals that capitalize upon the imbalance, the profit being the difference between the market prices at which the unit is traded. It is a widely used trading strategy, and probably one of the oldest trading strategies to exist. It is the simultaneous buying and selling of securities, currency, or commodities in different markets or in derivative forms in order to take advantage of differing prices for the same asset. A trader tries to exploit arbitrage opportunities like buying a stock on a foreign exchange where the price hasn’t yet adjusted for the fluctuating exchange rate. It is a necessary force in the financial marketplace.

Arbitrage is considered a risk-free profit for the investor or trader. When used by academics, an arbitrage is a transaction that involves no negative cash flow at any probabilistic or temporal state and positive cash flow in at least one state; in simple terms, it is the possibility of a risk-free profit after transaction costs. It exists as a result of market inefficiencies and would therefore not exist if all markets were perfectly efficient. For example, an arbitrage opportunity is present when there is the possibility to instantaneously buy something for a low price and sell it for a higher price.

Arbitrage provides a mechanism to ensure prices do not deviate substantially from fair value for long periods of time. In principle and in academic use, an arbitrage is risk-free; in common use, as in statistical arbitrage, it may refer to expected profit, though losses may occur, and in practice, there are always risks in arbitrage, some minor, some major (such as the devaluation of a currency or derivative). It is the strategy of taking advantage of price differences in different markets for the same asset. In academic use, an arbitrage involves taking advantage of differences in the price of a single asset or identical cash-flows; in common use, it is also used to refer to differences between similar assets (relative value or convergence trades), as in merger arbitrage. For it to take place, there must be a situation of at least two equivalent assets with differing prices.

People who engage in arbitrage are called arbitrageurs — such as a bank or brokerage firm. The term is mainly applied to trading in financial instruments, such as bonds, stocks, derivatives, commodities, and currencies. The concept is closely related to the market efficiency theory. In essence, arbitrage is a situation where a trader can profit from the imbalance of asset prices in different markets. Arbitrage has the effect of causing prices of the same or very similar assets in different markets to converge.