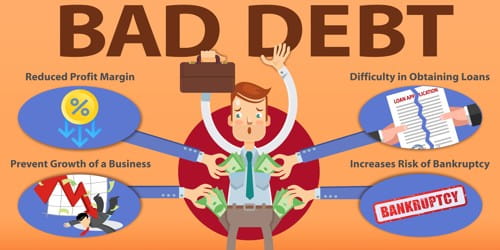 The term bad debts usually refer to accounts receivable that will not be collected. Debts, which are due to traders (debtors) because of credit sale and will not be realized at all, are called bad debts. In business, it is the portion of a loan or portfolio of loans a lender considers to be uncollectable. This is an expense that a business incurs once the repayment of credit previously extended to a customer is estimated to be uncollectible. This is considered a loss of the business and therefore debited to the profit and loss account. In personal finance, bad debt generally refers to high-interest consumer debt. Bad debt that applies to individual consumers is a term for debt that is harmful to consumers. It is a receivable that a customer will not pay. When it applies to transactions between companies is an inevitable part of doing business.