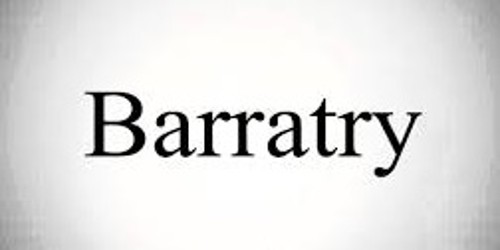 Barratry refers to an attorney’s illegal instigation of lawsuits with no legitimate claim. It is a marine insurance term, which signifies an unlawful or fraudulent act, or gross and culpable negligence of the master or crew of a ship in violation of his duty as such and to the prejudice of the owners or chatterers. It is an unlawful act or fraudulent breach of duty by a master of a ship or by the mariners to the injury of the owner of the ship or cargo. That means fraud by a master or crew at the expense of the owners of the ship or its cargo. It is essential in barratry that a criminal act or intent exist on the part of the master or mariners which inures to their own benefit and causes injury to the owners of the ship. Acts that are considered barratry include intentionally sinking the ship, transporting illegal immigrants, and stealing cargo.

Bouvier’s Law Dictionary described the maritime law term as: “An unlawful or fraudulent act, or very gross and culpable negligence of the master or the mariners of a vessel in violation of their duty as such, and directly prejudicial to the owner and without his consent.”

It is the act or practice of bringing a groundless lawsuit or lawsuits. It is an offense both at Common Law and under some state statutes. In common law, it means litigation for the purpose of harassment or profit. For barratry to be a criminal act, the accused must perform repeated and persistent acts of litigation. In maritime law, barratry is the commission of an act by the master or mariners of a vessel for an unlawful or fraudulent purpose that is contrary to the duty owed to the owners, by which act the owners sustain an injury. In admiralty law, it means misconduct by a crew of a ship resulting in its damage. Barratry typically involves the filing of a groundless claim in order to receive payment from clients.