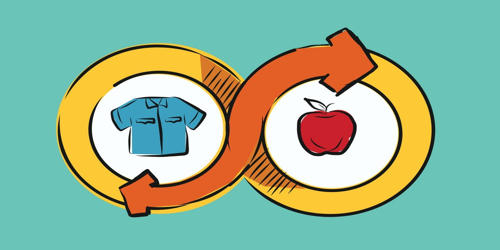 Barter is to exchange goods for other things rather than for money. In trade, barter is a system of exchange where participants in a transaction directly exchange goods or services for other goods or services without using a medium of exchange, such as money. Barter is an act of trading goods or services between two or more parties without the use of money. Economists distinguish barter from gift economies in many ways; barter, for example, features immediate reciprocal exchange, not delayed in time. In essence, bartering involves the provision of one good or service by one party in return for another good or service from another party. A simple example of a barter arrangement is a carpenter who builds a fence for a farmer.

The definition of barter is a system under which goods and services are exchanged instead of currency, or the actual goods or services that are being exchanged. Barter usually takes place on a bilateral basis, but may be multilateral. Bartering is the exchange of goods and services between two or more parties without the use of money. In most developed countries, barter usually only exists parallel to monetary systems to a very limited extent. Individuals and companies barter goods and services between each other based on equivalent estimates of prices and goods. Market actors use barter as a replacement for money as the method of exchange in times of monetary crisis, such as when currency becomes unstable or simply unavailable for conducting commerce. The terms of a barter agreement are often limited only to the creativity of the participants. They can involve trading standard, rotating impressions.

Bartering is based on a simple concept: Two individuals negotiate to determine the relative value of their goods and services and offer them to one another in an even exchange. This system has been used for centuries and long before money was invented. People exchanged services and goods for other services and goods in return. Nevertheless, economists since the times of Adam Smith (1723–1790), looking at non-specific pre-modern societies as examples, have used the inefficiency of barter to explain the emergence of money, of “the” economy, and hence of the discipline of economics itself. Bartering allows individuals to trade items that they own but are not using for items that they need, while keeping their cash on hand for expenses that cannot be paid through barterings, such as a mortgage, medical bills, and utilities. Today, bartering has made a comeback using techniques that are more sophisticated to aid in trading; for instance, the Internet.