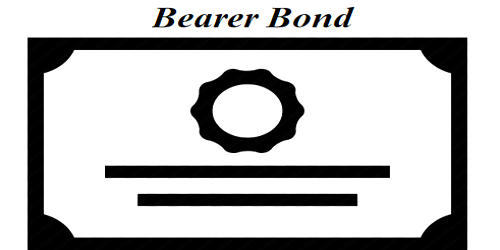 A bearer bond is a bond or debt security issued by a business entity such as a corporation, or a government. It is a type of bond issued by a company, a corporation, or government for which there are no records maintained about the ownership of the instrument, and whoever has the custody of the instrument is the owner of the instrument. As a bearer instrument, it differs from the more common types of investment securities in that it is unregistered—no records are kept of the owner, or the transactions involving ownership. It is a fixed-income security that is owned by the holder, or bearer, rather than by a registered owner. Whoever physically holds the paper on which the bond is issued is the presumptive owner of the instrument. These bonds are frequently used by dishonest individuals, who choose not to declare their gains on these investments, in an effort to evade taxes. This is useful for investors who wish to retain anonymity.

The bearer bond is a physical certificate with coupons attached that are used to redeem the interest payments. These bonds are fixed-income instruments whose certificates do not contain the holder’s personal information. Such bonds are held in physical form by the owner, who receives interest payments by physically detaching coupons from the bond certificate and delivering them to the paying agent.

Some of the advantages are as follows:

Recovery of the value of a bearer bond in the event of its loss, theft, or destruction is usually impossible. Some relief is possible in the case of United States public debt. Furthermore, while all bond types state maturity dates and interest rates, bearer bond coupons for interest payments are physically attached to the security and must be submitted to an authorized agent, in order to receive payment. Most bonds are issued to a particular individual in that person’s name; bearer bonds belong to whoever holds them. The bondholder is required to submit the coupons to a bank for payment and then redeem the physical certificate when the bond reaches the maturity date. Bearer bonds are unregistered. This means that the interest and principal for the bearer bond are due to whoever is in possession of the bond.

Some of the limitations are as follows: