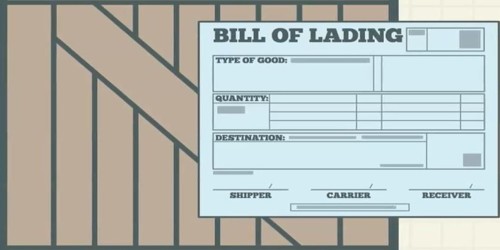 It is a receipt given by the captain of the ship of goods shipped on board his vessel. It is a detailed list of a ship’s cargo in the form of a receipt given by the master of the ship to the person consigning the goods. The term “ lade” means to put the cargo onto a ship or other form of goods carrier. It is a legal document issued by a carrier to a shipper that details the type, quantity, and destination of the goods being carried. The original copy of the bill of lading is provided to the carrier, and a copy of the same should also be ascribed to the packaged freight. If managed and reviewed properly, a bill of lading can help prevent asset theft.

Bill of Lading is a document of title, a receipt for shipped goods, and a contract between a carrier and shipper. This important document used in foreign trade shows the description of goods, marks, weight, quantity, and freight. It is a document that establishes an agreement between a shipper and a transportation company for the transportation of goods. It works as a receipt of freight services, a contract between a freight carrier and shipper and a document of title. This certificate is treated as a document of title to the goods. A completed BOL legally shows that the carrier has received the freight as described and is obligated to deliver that freight in good condition to the consignee. Land, ocean, and air are the means used for bills of lading.

The purposes of a bill of lading include: