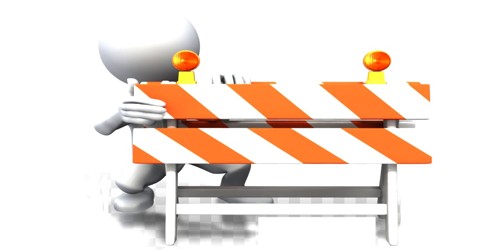 It is an attempt to cut off all supplies from a town or seaport during a state of war by surrounding the place with troops or ships. They are meant to prevent ships from reaching enemy ports with goods, food, supplies, or support of any kind. It is an effort to cut off supplies, war material or communications from a particular area by force, either in part or totally. They are regulated by international law and custom and require advance warning to neutral states and impartial application. It is an act or means of sealing off a place to prevent goods or people from entering or leaving. It is the situation in which a country or place is surrounded by soldiers or ships to stop people or goods from going in or out. It is an old naval tactic that has been used throughout the years by various nations in attempts to starve, outlast, or simply destroy their enemies. It should not be confused with an embargo or sanctions, which are legal barriers to trade.

Blockade means any blocking action designed to isolate another nation and cut off communication and commerce with it or any strategic barrier. It restricts the trading rights of neutrals, who must submit for inspection for contraband, which the blockading power may define narrowly or broadly, sometimes including food and medicine. In financial meaning, it is a situation of isolation of a nation, area, city, or harbor by hostile ships or forces in order to prevent the entrance and exit of traffic and commerce. A military blockade is undertaken to attain some specific military objective, such as the capture of a naval port. Economic blockade means, an embargo of all trade with a country or region, intended to damage or dislodge the government. Blockade running is the practice of delivering cargo (food, for example) to a blockaded area.