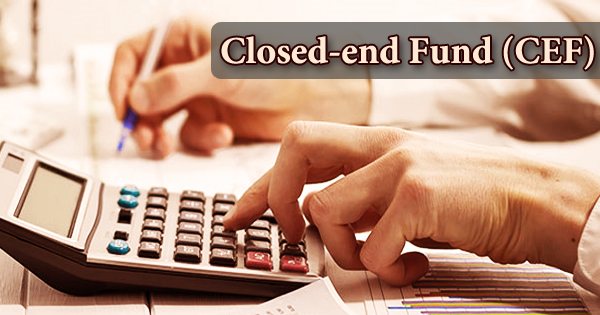 A closed-end fund (CEF) or closed-ended fund is a pooled asset portfolio that obtains a predetermined amount of money through an initial public offering (IPO) and then lists its shares on a stock market for trading. Managers do not generate new shares in closed-end funds to fulfill investor demand, unlike open-end funds. Instead, shares may only be bought and sold on the open market, as was the original design of the mutual fund, which precedes open-end mutual funds but provides the same actively-managed pooled assets.

A closed-end fund is also known as a “closed-end investment” or a “closed-end mutual fund.” Closed-end funds that are sold publicly in the United States must be registered under both the Securities Act of 1933 and the Investment Company Act of 1940. It frequently provides greater returns or better income streams than open-end funds. A closed-end fund’s price changes in response to supply and demand, as well as the changing prices of its portfolio’s assets.

Closed-end funds are often listed on a reputable stock market and can be purchased and sold there. A closed-end fund, like a mutual fund, has a professional manager that manages the portfolio and actively buys and sells holding assets. The market determines the price per share, which is generally different from the underlying value or net asset value (NAV) per share of the fund’s investments. When a price is below or above the NAV, it is said to be at a discount or premium to the NAV.

It trades like an exchange-traded fund, with its price fluctuating during the trading day. The market’s belief in the investment managers’ or underlying securities’ potential to deliver above-market returns may result in a premium. A discount might represent future charges to be taken from the fund by the management, risk associated with excessive levels of leverage, liquidity problems, or a lack of investor trust in the underlying securities. The closed-end fund, on the other hand, is unique in that after its initial public offering, the fund’s parent firm does not issue more shares, and the fund itself does not redeem its shares. Rather, investors may only buy or sell the fund on the secondary market, just like individual stock shares.

The New York Stock Exchange dominates in the United States, despite competition from the NASDAQ; in the United Kingdom, the London Stock Exchange’s main market is home to mainstream funds, though AIM supports many small funds, particularly venture capital trusts; and in Canada, the Toronto Stock Exchange lists many closed-end funds. While a closed-end fund differs from an open-end fund, such as a mutual fund or an exchange-traded fund (ETF), it nevertheless has several qualities in common with those two products. Closed-end funds, like their more well-known open-ended relatives, are generally sponsored by a fund management firm that will oversee how the fund is invested.

An investment adviser manages both closed-end and open-end funds through a management team that trades the portfolio. Both have an annual expense ratio and have the ability to distribute income and capital gains to shareholders. They start by raising money from investors in an initial public offering (IPO), which can be open to the public or limited to accredited investors. Investors receive shares in the amount of their initial investment. The money is pooled by the fund managers, who then buy securities or other assets. The fund’s charter, prospectus, and applicable government laws determine what the fund management can invest in.

A closed-end fund is structured as a publicly listed investment firm, and it, as well as its portfolio manager, must be registered with the Securities and Exchange Commission (SEC). Some funds invest in stocks, while others invest in bonds, while yet others invest in very specialized items (for instance, tax-exempt bonds issued by the state of Florida in the USA). Unlike most ETFs or index mutual funds, it is generally actively managed, and its securities portfolio is typically focused on a single industry, geographic region, or market sector. A closed-end fund (CEF) varies from an open-end mutual fund in that it is not open to the public:

A closed-end fund generates a certain amount of money just once, through an initial public offering (IPO), by selling a defined number of shares to investors. The offering is “closed” after all of the shares have been sold, thus the term. The fund does not receive any fresh investment cash. A closed-end fund’s use of leverage (gearing) is another differentiating trait. With this increased invested cash, the fund management aims to achieve a larger return. Auction rate instruments, preferred stock, long-term debt, and reverse-repurchase agreements are all options for raising extra money.

Mutual funds and exchange-traded funds, on the other hand, are continually accepting new investor money, issuing new shares, and redeeming or buying back shares from shareholders who want to sell. Long-term debt and reverse repurchase agreements are two more options for the firm to generate extra funds. Funds may employ a variety of leverage strategies or use each one separately. The fund, on the other hand, is more likely to utilize just one leverage strategy. The way a closed-end fund is valued is one of its distinguishing characteristics. The fund’s NAV is determined on a regular basis.

Closed-end fund shares are exchanged at whatever price the market will bear between market opening and closing hours. The price it trades for on the market, on the other hand, is totally decided by supply and demand. Due to investor demand, a closed-end fund may trade at a premium or a discount to its net asset value (NAV). Advanced forms of orders, such as limit and stop orders, may be used to cope with the situation. A premium price is one that is higher than the NAV, whereas a discount is one that is lower than the NAV.

Financially, closed-end funds have several benefits over their open-ended counterparts. These funds may also trade at a premium if they are managed by a historically strong stock picker. In contrast, the fund may trade at a discount to its NAV due to a lack of investor demand or a poor risk and return profile. Because it is listed on the market, a closed-end fund is required to follow certain requirements, such as submitting reports with the listing authority and conducting annual shareholder meetings.