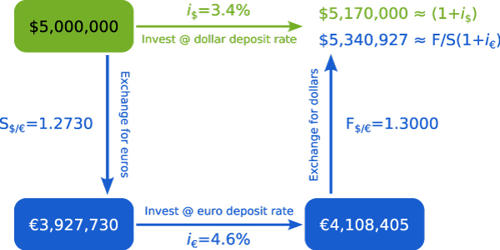 Covered interest rate arbitrage is the practice of using favorable interest rate differentials to invest in a higher-yielding currency, and hedging the exchange risk through a forward currency contract. The opportunity to earn riskless profits arises from the reality that the interest rate parity condition does not constantly hold. It is only possible if the cost of hedging the exchange risk is less than the additional return generated by investing in a higher-yielding currency – hence the word, arbitrage. When spot and forward exchange rate markets are not in a state of equilibrium, investors will no longer be indifferent among the available interest rates in two countries and will invest in whichever currency offers a higher rate of return. The covered interest rate parity situation means there is no opportunity for arbitrage using forward contracts, which often exists between countries with different interest rates. This occurs when a portfolio manager invests dollars in an instrument denominated in a foreign currency and hedges the resulting foreign exchange risk by selling the proceeds of the investment forward for dollars.

Although covered interest arbitrage is a low-risk strategy you may find it difficult to make a large profit. It is a strategy in which an investor uses a forward contract to hedge against exchange rate risk. This form of arbitrage is complex and offers low returns on a per-trade basis. Economists have discovered various factors that affect the occurrence of deviations from covered interest rate parity and the fleeting nature of covered interest arbitrage opportunities, such as different characteristics of assets, varying frequencies of time series data, and the transaction costs associated with arbitrage trading strategies. Returns on covered interest rate arbitrage tend to be small, especially in markets that are competitive or with relatively low levels of information asymmetry.