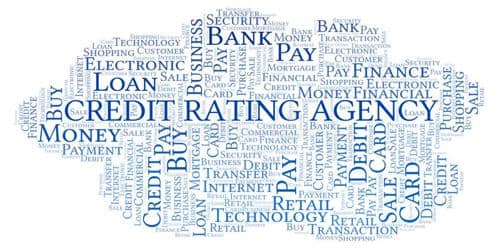 A credit rating agency is a private company that looks at the creditworthiness of a large-scale borrower, such as a company or country. It is a company that assigns credit ratings, which rate a debtor’s ability to pay back debt by making timely principal and interest payments and the likelihood of default. It effectively ranks the borrower on their ability to pay off their loan. An agency may rate the creditworthiness of issuers of debt obligations, of debt instruments, and in some cases, of the services of the underlying debt, but not of individual consumers. A credit rating is a quantified assessment of the creditworthiness of a borrower in general terms or with respect to a particular debt or financial obligation.

Credit rating agencies give ratings such as AAA, B-, or C, for example. The debt instruments rated by CRAs include government bonds, corporate bonds, CDs, municipal bonds, preferred stock, and collateralized securities, such as mortgage-backed securities and collateralized debt obligations. They give an investor a better idea of that company or country’s ranking and therefore its creditworthiness. Each agency uses unique letter-based scores to indicate if a debt has a low or high default risk and the financial stability of its issuer.

A credit rating is a quantified assessment of the creditworthiness of a borrower in general terms or with respect to a particular debt or financial obligation. The issuers of the obligations or securities may be companies, special purpose entities, state or local governments, non-profit organizations, or sovereign nations. A credit rating facilitates the trading of securities on a secondary market. A credit rating or score can be assigned to any entity that seeks to borrow money—an individual, corporation, state or provincial authority, or sovereign government. It affects the interest rate that a security pays out, with higher ratings leading to lower interest rates. Individual consumers are rated for creditworthiness not by credit rating agencies but by credit bureaus (also called consumer reporting agencies or credit reference agencies), which issue credit scores. Potential investors, customers, employees, and business partners rely upon the data and objective analysis of credit rating agencies in determining the overall strength and stability of a company. The debt issuers may be sovereign nations, local and state governments, special purpose institutions, companies, or non-profit organizations.

The value of credit ratings for securities has been widely questioned. The rating assigned to a given debt shows an agency’s level of confidence that the borrower will honor its debt obligations as agreed. Hundreds of billions of securities that were given the agencies’ highest ratings were downgraded to junk during the financial crisis of 2007–08. Rating downgrades during the European sovereign debt crisis of 2010–12 were blamed by EU officials for accelerating the crisis. Rating agencies were also criticized for possible conflict of interest between them and issuers of securities.