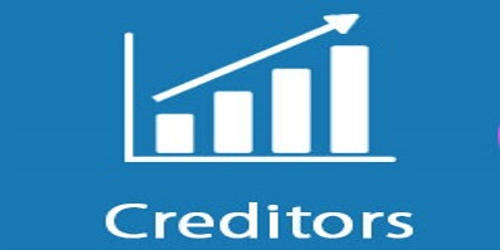 The definition of a creditor is a person to whom money is owed or someone who provides credit. A creditor is a party (e.g., person, organization, company, or government) that has a claim on the services of a second party.  It is a person or institution to whom money is owed. The first party, in general, has provided some property or service to the second party under the assumption (usually enforced by contract) that the second party will return an equivalent property and service. The second party is frequently called a debtor or borrower. The first party is called the creditor, which is the lender of property, service, or money. An example of a creditor is a credit card company.

A creditor is a term used in accounting to describe an entity (can either be a person, organization, or government body) that is owed money, as they have provided goods or services to another entity. Creditors can be broadly divided into two categories: secured and unsecured. A secured creditor has security or charge, which is some or all of the company’s assets, to secure the debt owed to him. Sometimes, this entity will charge interest on money borrowed as a way to make money. This could be an interest on bank loan repayments or credit card payments. This could be, for example, a mortgage, where the property represents the security. An unsecured creditor does not have a charge over the company’s assets.

The term creditor is frequently used in the financial world, especially in reference to short-term loans, long-term bonds, and mortgage loans. In law, a person who has a money judgment entered in their favor by a court is called a judgment creditor. A business that provides supplies or services to a company or individual and does not demand payment immediately is also considered a creditor, based on the fact that the client owes the business money for services already rendered.

The term creditor derives from the notion of credit. Creditors can be classified as either personal or real. People who loan money to friends or family are personal creditors. Real creditors such as banks or finance companies have legal contracts with the borrower, sometimes granting the lender the right to claim any of the debtor’s real assets (e.g., real estate or cars) if they fail to pay back the loan. Also, in modern America, credit refers to a rating that indicates the likelihood a borrower will pay back their loan. In earlier times, credit also referred to reputation or trustworthiness.