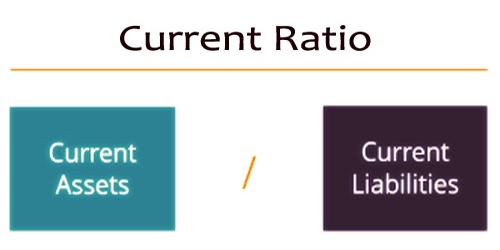 While the range of acceptable current ratios varies depending on the specific industry type, a ratio between 1.5 and 3 is generally considered healthy. A ratio value lower than 1 may indicate liquidity problems for the company, though the company may still not face an extreme crisis if it’s able to secure other forms of financing. A ratio over 3 may indicate that the company is not using its current assets efficiently or is not managing its working capital properly.

Formula and Calculation for Current Ratio –

To calculate the ratio, analysts compare a company’s current assets to its current liabilities. Current assets listed on a company’s balance sheet include cash, accounts receivable, inventory, and other assets that are expected to be liquidated or turned into cash in less than one year. Current liabilities include accounts payable, wages, taxes payable, and the current portion of long-term debt.

The current ratio is called “current” because, unlike some other liquidity ratios, it incorporates all current assets and liabilities.

If current liabilities exceed current assets the current ratio will be less than 1. A current ratio of less than 1 indicates that the company may have problems meeting its short-term obligations. Some types of businesses can operate with a current ratio of less than one, however. If inventory turns into cash much more rapidly than the accounts payable become due, then the firm’s current ratio can comfortably remain less than one. Inventory is valued at the cost of acquiring it and the firm intends to sell the inventory for more than this cost. The sale will, therefore, generate substantially more cash than the value of inventory on the balance sheet. Low current ratios can also be justified for businesses that can collect cash from customers long before they need to pay their suppliers.

If a company has to sell of fixed assets to pay for its current liabilities, this usually means the company isn’t making enough from operations to support activities. In other words, the company is losing money. Sometimes this is the result of poor collections of accounts receivable.

The current ratio also sheds light on the overall debt burden of the company. If a company is weighted down with current debt, its cash flow will suffer.

If the current ratio is too high (much more than 2), then the company may not be using its current assets or its short-term financing facilities efficiently. This may also indicate problems in working capital management.

Calculating the current ratio at just one point in time could indicate the company can’t cover all its current debts, but it doesn’t mean it won’t be able to once the payments are received.

Additionally, some companies, especially larger retailers such as Wal-Mart, have been able to negotiate much longer-than-average payment terms with their suppliers. If a retailer doesn’t offer credit to its customers, this can show on its balance sheet as a high payables balance relative to its receivables balance. Large retailers can also minimize their inventory volume through an efficient supply chain, which makes their current assets shrink against current liabilities, resulting in a lower current ratio. Wal-Mart’s current ratio in January 2019 was 0.80.

The current ratio can be a useful measure of a company’s short-term solvency when it is placed in the context of what has been historically normal for the company and its peer group. It also offers more insight when calculated repeatedly over several periods.