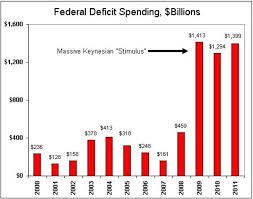 Deficit spending occur when a government’s expenditures exceed their revenues, causing or deepening a deficit. This excess spending must be financed through borrowing, probable from foreign governments. The increased government spending may help stimulate the economy as more money flows in, but the jump in borrowing may have an adverse effect by raising interest levels. Deficit spending is just how much by which spending exceeds revenue over a particular stretch of time, also called simply shortfall, or budget deficit; the contrary of budget surplus.