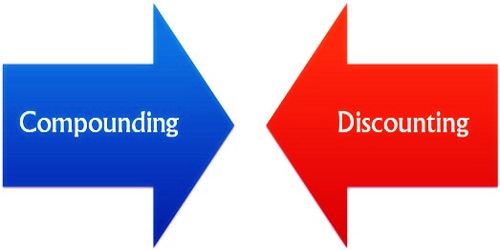 Difference Between Compounding And Discounting

When interest is earned on the principal and the entire amount is again invested to earn more money that is called compounding. Usually, when money is invested with a bank or a credit firm, they compound interest in a fixed time period. This could be weekly, monthly, half-yearly, or annually.

Compounding is the method used in finding out the future value of the present investment. The future value can be computed by applying the compound interest formula which is as under: 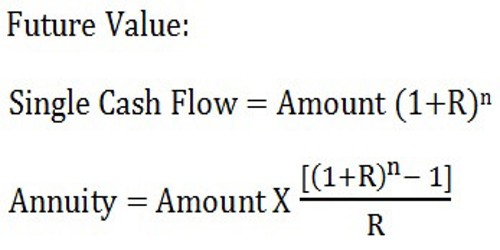 R = Rate of return on investment

The best way to understand this process is by example.

In this illustration let us suppose that we have invested a sum of $1000 with an interest rate of 10% per annum.

So in two years’ time, we would have earned another $200 bringing us to a total sum of $1200 without compounding our interests.

For an investment to be valuable, it must give the investor returns in the future. Calculating the value of those future cash flows in terms of the present by using a discount factor is called discounting. This is an important process because it can be used to compare the possibilities arising from multiple options. It is a vital part of deciding where to invest capital.

In determining the discounted value of an investment, we must first calculate the returns that it will bring and the time period in which that will occur. Then by applying the formula for discounting the discount factor for the time periods can be calculated. The final step of this process is to multiply the first result by the second and that brings us to the present value of our investment.

The formula for discounting is given below:

Key Differences Between Compounding and Discounting –

The following are the major differences between compounding and discounting:

So, we can say that if we reverse compounding it will become discounting. Compounding Factor table and Discounting Factor table is taken into consideration for the quick calculation of the two. In the table, we will find the factors, concerning different rates and periods. The factor is directly multiplied by the amount to arrive at the present or future value.