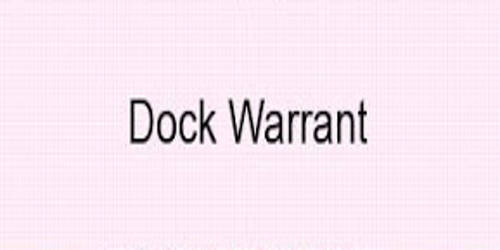 Dock Warrant is a customhouse license or authority. It is an important document used in foreign trade. This document is given by the owner of a dock or warehouse stating that certain specified goods are stored in the dock and registered in the name of a specified person. It is an instrument issued by a ware housekeeper, licensed by the state to traders who deposit goods with them. It entitles such a person to take possession of the goods. It is a receipt for goods given by a dock warehouse or wharf, acknowledging that the goods are awaiting shipment. In law, it is a document by which the owner of a marine or river dock certifies that the holder is entitled to goods imported and warehoused in the docks.

A dock warrant is liable to a stamp duty of threepence, which may be denoted by an adhesive stamp, to be canceled by the person by whom the instrument is executed or issued. A Warehouse-keeper’s Certificate/Receipt is a document issued by a warehouse-keeper certifying that he holds certain goods described in the certificate and awaits instructions for their disposal form the person to whom to certificate is addressed. For example, In England, this certificate is given to the owner of goods warehoused in the docks; a warehouse-receipt. A document issued by a dock company or dock owner in England, stating that certain goods therein mentioned are deliverable to a person therein named, or to his assigns, by indorsement.

A dock warrant certifies that the holder is entitled to goods imported and warehoused in the docks. It is a document that is virtually a certificate from the dock company that certain goods which are described therein are in their possession which they agree to deliver to any person specified by the owner. It transfers the absolute right to the goods described in it. A more formal document is a dock warrant or wharfinger’s warrant, which gives the holder title to the goods. Such documents, like a bill of lading, are transferable by endorsement and delivery and require to be stamped.