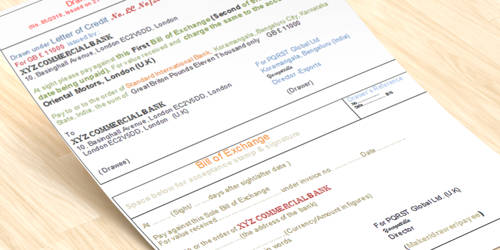 A bill with which shipping documents like a bill of lading, an insurance policy, invoice, etc. are enclosed is known as a ‘documentary bill. It is a bill of exchange drawn on a consignee of goods and has appended to it the shipment documents by way of collateral security for its payment. It is a bill of exchange drawn payable overseas and accompanied by commercial documents such as Bills of Lading, invoice and insurance papers. These documents are required to take delivery of goods from the shipping company and from the customs authorities on, importation from any country. These documents include the bill of lading, insurance policy, dock warrant, invoice, etc.

A documentary Bill of Exchange is one where the relative shipping documents such as the Bill of Lading, marine insurance policy, invoice, and other documents are sent along with the Bill of Exchange. It is a bill of exchange attached to the shipping documents of a parcel of goods. It is a bill of exchange to which are attached certain documents, usually the bill of lading, a policy of insurance and instrument of hypothecation. Under a Documentary Bill, the bank opens no letter of credit. Bank functions as an agent for the collection of the bill. The role of a bank is that of medium only. There is no commitment on the part of the bank for any payment, whatsoever.

When the exporter is unable to get the advance payment from the importer, the next best alternative mode of payment is ‘Documentary Bills’. There is no risk in case of non-payment, an important advantage forms the viewpoint of the exporter. Exporter gets paid only if the importer makes payment. If the importer fails to make a payment on the due date, an exporter has no alternative other than filing a civil suit against importer as it is not legally possible to get back possession of goods. Under those circumstances, ‘Documentary Bills’ is a bridge, as documents are routed through the bank. It provides the required solution as it satisfies the claims of both parties. In this system of payment, banks act as a media to reconcile the conflicting requirements of the exporter as well as importer.