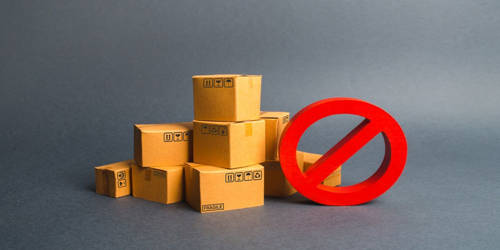 An embargo is an order of a government prohibiting the departure of commercial ships from its ports. It refers to an order issued by a government preventing the arrival or departure of a ship, or restricting the import or export of’ specified goods. It is an official ban on trade or other commercial activity with a particular country. Such prohibitions are generally enforced by belligerent states in times of war. If one government places a trade embargo on another, it can be an act of war between the two countries. It is a tool of economic warfare that may be employed for a variety of political purposes, including demonstrating resolve, sending a political signal, retaliating for another country’s actions, compelling a country to change its behavior, deterring it from engaging in undesired activities and weakening its military capability. It is a powerful tool that can influence a nation, both economically and politically.

There are several different types of embargoes. A trade embargo refers to banning exports or imports to or from one or more countries. These can then be narrowed down more specifically. The term is also used in the media industry. Companies often embargo press releases.

The definition of an embargo is a government ban on moving commercial ships in and out of certain ports or a restriction of trade for a specific product or with a specific country. It is a legal prohibition by a government or group of governments restricting the departure of vessels or movement of goods from some or all locations to one or more countries. It is designed to isolate a country and create difficulties for its governing body, forcing it to act on the issue that led to the embargo. A trade embargo, for example, is a prohibition on exports to one or more countries, though the term is often used to refer to a ban on all commerce.

The enforcement of an embargo may involve the detention of merchant vessels or other property to prevent their movement to a foreign territory. The ability to easily trade goods all over the world is key to maximizing the economic prosperity of a country. It is usually created as a result of unfavorable political or economic circumstances between nations. Overall, it is an order stopping the movement of trade ships into or out of a country.