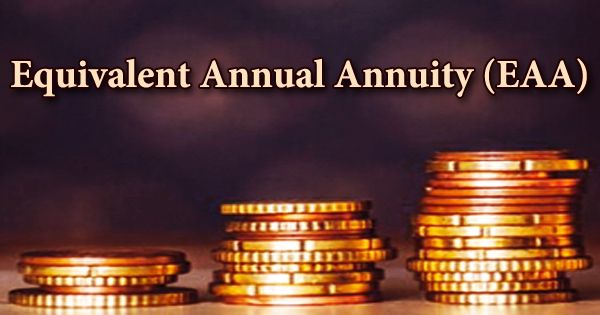 One of two approaches used in capital budgeting to compare mutually exclusive projects with unequal lives is the equivalent annual annuity (or EAA) approach. Traditional project profitability metrics like net present value (NPV), internal rate of return (IRR), and the payback period can give you a good idea of how financially viable a project is. The EAA approach figures the consistent yearly income produced by a venture over its life expectancy in the event that it was an annuity.

EAA smooths out all cash flows and produces a single average cash flow for all periods that equals the project’s NPV when discounted. The following formula is used to measure EAA:

When comparing projects with unequal lives, the one with the higher equivalent annual annuity should be chosen. Another method of clarifying the helpfulness of the same yearly annuity recipe is that a venture with a more limited life expectancy can be reinvested and the income on the reinvestment isn’t contemplated when utilizing the NPV equation. The comparable annual annuity formula allows for a period comparison, eliminating the need to accept reinvestment of the same earnings as the current investment.

Consider the case of a business comparing two ventures, A and B, with a weighted average cost of capital of 10%. Project A has an NPV of $3 million and a five-year estimated life, while Project B has an NPV of $2 million and a three-year estimated life. Project A has an EAA of $791,392.44 and Project B has an EAA of $804,229.61, according to a financial calculator. The organization will prefer Project B under the EAA approach because it has a higher comparable annual annuity benefit.