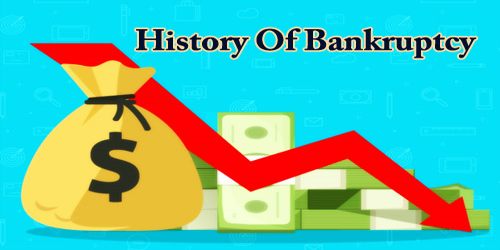 The most widely-accepted theory on the origin of the word “bankruptcy” comes from a mixing of the ancient Latin words bancus (bench or table) and ruptus (broken). A folk etymology alleges that Italian bankers’ benches were smashed if they defaulted on payment, but this is often dismissed as a legend.

When a banker, who originally conducted his public marketplace transactions on a bench, was unable to continue lending and meet obligations, his bench was broken in a symbolic show of failure and inability to negotiate. As a result of the frequency of this practice in Medieval Italy, the current term bankrupt is commonly believed to spring specifically from the translation of banco rotto, Italian for a broken bank. Others speculate that the word’s origin actually stems from the French expression banque route, table trace. This phrase relates to the metaphorical practice of only a sign left at the site of a banker’s table once there and now gone. This practice involved those who fled quickly, escaping with money that had been entrusted to them.

Bankruptcy offers an individual or business a chance to start fresh by forgiving debts that simply cannot be paid while giving creditors a chance to obtain some measure of repayment based on the individual’s or business’s assets available for liquidation. In theory, the ability to file for bankruptcy benefits the overall economy by allowing people and companies a second chance to gain access to credit and by providing creditors with a portion of debt repayment. Upon the successful completion of bankruptcy proceedings, the debtor is relieved of the debt obligations that were incurred prior to filing for bankruptcy.

In Ancient Greece, bankruptcy did not exist. If a man owed and he could not pay, he and his wife, children or servants were forced into “debt slavery”, until the creditor recouped losses through their physical labor. Many city-states in ancient Greece limited debt slavery to a period of five years; debt slaves had the protection of life and limb, which regular slaves did not enjoy. However, servants of the debtor could be retained beyond that deadline by the creditor and were often forced to serve their new lord for a lifetime, usually under significantly harsher conditions. An exception to this rule was Athens, which by the laws of Solon forbade enslavement for debt; as a consequence, most Athenian slaves were foreigners (Greek or otherwise).

The Statute of Bankrupts of 1542 was the first statute under English law dealing with bankruptcy or insolvency. Bankruptcy is also documented in East Asia. According to al-Maqrizi, the Yassa of Genghis Khan contained a provision that mandated the death penalty for anyone who became bankrupt three times.

A failure of a nation to meet bond repayments has been seen on many occasions. Philip II of Spain had to declare four state bankruptcies in 1557, 1560, 1575 and 1596. According to Kenneth S. Rogoff, “Although the development of international capital markets was quite limited prior to 1800, we nevertheless catalog the various defaults of France, Portugal, Prussia, Spain, and the early Italian city-states. At the edge of Europe, Egypt, Russia, and Turkey have histories of chronic default as well.”

Before the 20th century, rules and practices concerning bankruptcy generally favored the creditor and were harsher toward bankrupt. The focus was on recovering the investments of the creditors, and unlike now almost all bankruptcies at that time were involuntary. The practice of involuntary filings continues to exist today, with an option to convert to voluntary filing status; however, this remains relatively rare.

There were a number of other notable developments in bankruptcy rules during the 1980s. The 1978 Act did not cover tax-related issues and this was addressed by the Bankruptcy Tax Act of 1980. The Tax Act clarified such things as tax loss carry-forwards and taxation rules when there is an exchange of equity for debt. The Bankruptcy Amendment Act of 1984 limited the right of companies to terminate labor contracts.

Bankruptcy laws were enacted to provide and govern an orderly and equitable liquidation of the estates of insolvent debtors. This purpose has remained an important aim of bankruptcy legislation since the Middle Ages. Because in the past bankruptcy was coupled with the loss of civil rights and the imposition of penalties upon fraudulent debtors, the designation bankrupt came to be associated with dishonesty, casting a stigma on persons who were declared bankrupts.

Eventually, however, bankruptcy legislation was extended to provide procedures for the adjustment of debts so as to avoid liquidation and for the rehabilitation of insolvent debtors. Modern bankruptcy laws, therefore, include detailed provisions for preventive compositions, arrangements, or corporate reorganizations of various types. In fact, the salvage of an enterprise in financial difficulties has become the principal focus of bankruptcy legislation with particular concern for the maintenance of employment opportunities and the protection of members of the labor force.