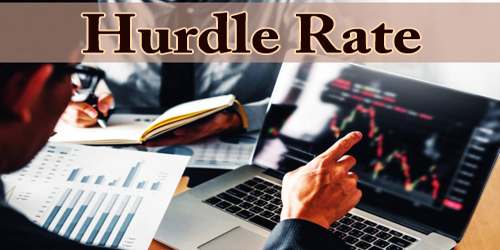 When companies evaluate projects, they set a rate that the projects must earn before they can be considered viable options. In a manner of speaking, the prospective projects must clear the ‘hurdle rate’.

Here’s the formula for calculating a hurdle rate:

By adding a risk premium to the cost of capital (WACC) in determining the hurdle rate, the managers of ABC Inc. can make a fair comparison between projects. Just because a low-risk project does not look as attractive on paper due to smaller potential cash flows, does not make it an unworthy selection. After including risk in the equation, the manager may well find that the low-risk project is actually expected to yield a higher net present value.

Hurdle rates are very important in the business world, especially when it comes to future endeavors and projects. Companies determine whether they will take on capital projects based on the level of risk associated with it. If an expected rate of return is above the hurdle rate, the investment is considered sound. If the rate of return falls below the hurdle rate, the investor may choose not to move forward. A hurdle rate is also referred to as a break-even yield.

There are two ways the viability of a project can be evaluated. In the first, a company decides based on the net present value (NPV) approach by performing a discounted cash flow (DCF) analysis.

In analyzing a potential investment, a company must first hold a preliminary evaluation to test if a project has a positive net present value (NPV). Care must be exercised, as setting a very high rate could be a hindrance to other profitable projects and could also favor short-term investments over the long-term ones. A low hurdle rate could also result in an unprofitable project.

Using a hurdle rate to determine an investment’s potential helps eliminate any bias created by preference toward a project. By assigning an appropriate risk factor, an investor can use the hurdle rate to demonstrate whether the project has financial merit regardless of any assigned intrinsic value.

For example, a company with a hurdle rate of 10% for acceptable projects would most likely accept a project if it has an IRR of 14% and no significant risk. Alternatively, discounting the future cash flows of this project by the hurdle rate of 10% would lead to a large and positive net present value, which would also lead to the project’s acceptance.

The limitations of using a hurdle rate –

It’s not always as straightforward as picking the investment with the highest internal rate of return. A few important points to note are:

In addition, choosing a risk premium is a difficult task as it is not a guaranteed number. A project or investment may return more or less than expected and if chosen incorrectly, this can result in a decision that is not an efficient use of funds or one that results in missed opportunities.

Example of a Hurdle Rate –

Let’s take a look at a simplified example. Amy’s Hammer Supply is looking to purchase a new piece of machinery. It estimates that with this new piece of machinery it can increase its sales of hammers, resulting in a return of 11% on its investment. The WACC for the firm is 5% and the risk of not selling additional hammers is low, so a low-risk premium is assigned at 3%. The hurdle rate is then:

As the hurdle rate is 8% and the expected return on the investment is higher at 11%, purchasing the new piece of machinery would be a good investment.