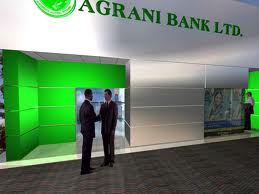 Agrani Bank Limited (ABL) is established in 1972. It is a state owned bank. It is formed by the composition of ex-Habib Bank ltd and ex-Commerce Bank ltd. There are six section of ABL (Senpara branch) in GB- Cash, computer, account opening, clearing, Accounts and local remittance.

Background of the study:

Agrani Bank Limited (ABL) is established in 1972. It is a state owned bank. It is formed by the composition of ex-Habib Bank ltd and ex-Commerce Bank ltd. Agrani Bank Limited is a Bank with an Authorized Capital and Paid-up Capital of Tk.800.00 million and Tk.248.00 million respectively. The total equity of the bank stands at 725.00 million as of December, 2010. The total profit of last year is about Tk.680.00 million . There are about 867 branches in which 10 branches are corporate. There are about 341 town branches and 526 rural branches.

The weaknesses of ABL are: Absence of service providing mentality, Absence of IT Applications. Somewhat manual based, Lack of motivation of workers, depends on Head Office.

It’s Vision is to become a leading bank of Bangladesh operating at international level of efficiency, quality and customer service. And it’s Mission is We operate ethically and fairly within the stringent framework set by our regulators. We will go fusing ideas and lessons from best practice to explore new avenues to stay stronger and more efficient and competitive. We will apply information and communication technology for the benefit of our customers and employees.

Main objective of this report is to evaluate the financial performance of Agrani Bank Limited (ABL). And the specific objectives are:

The report has been done from the primary and secondary sources but it requires long time to acquire to the real experience. Time limitation is the main constrain in this respect. The lack of available of data is another limitation so the result shown by the study does not demonstrate actual conditions and issues related this report. While conducting the report on “Performance Analysis on ABL” Some limitations were yet present there:

Bangladesh is a developing country so the banking system as a whole plays a vital role in the progress of economic development. Banking system plays a very important role in the economic life of the nation. Banking is now an essential part of our economic system. Modern trade and commerce would almost be impossible without the availability of suitable banking services.

Financial markets are three types in Bangladesh. There are given below-

An overview of Agrani bank: Agrani Bank is a state-owned commercial bank of Bangladesh. It established in 1972. Its headquarter is situated at Motijheel in Dhaka. Agrani Bank was nationalized after liberation of Bangladesh. It started functioning as a commercial bank in 1972 and continued as a public sector bank till 16 May, 2007. On 17 May the bank started the third chapter of its life as a limited company. The bank now performs its commercial banking operation through 873 outlets all over Bangladesh under the leadership of a 13 member Board of Directors.

In Bangladesh Sonali Bank is the largest among the Nationalized Commercial Banks (NCBs) while Pubali is leading in the private ones. Among the 12 foreign banks, Standard Chartered has become the largest in the country. Besides the scheduled banks, Samabai (Cooperative) Bank, Ansar-VDP Bank, Karmasansthan (Employment) Bank and Grameen bank are functioning in the financial sector. In Bangladesh the number of total branches of all scheduled banks is 6,038. Of the branches, 39.95 per cent, 2,412 banks are located in the urban areas and 60.05 per cent ,3,626 banks  in the rural areas. Of the branches Nationalist Commercial Banks (NCBs ) hold 3,616, private commercial banks 1,214, foreign banks 31 and specialized banks 1177.

Bangladesh Bank has been working as the central bank since the country’s independence. Its prime jobs include issuing of currency, maintaining foreign exchange reserve and providing transaction facilities of all public monetary matters. Bangladesh Bank regulates and supervises the activities of all banks. Bangladesh Bank is also responsible for planning the government’s monetary policy and implementing it thereby.

Some commercial banks performance are given below-

Growth of Employee of Commercial Banks: The highest no of employees are working in Islami Bank Bangladesh Limited( IBBL) 7459 and lowest in DBBL. The growth percentage is higher in DBBL and lowest in Prime Bank.

Liquidity ratios- A liquid asset is one that can be easily converted to cash without significant loss of its original value.

The ratio is calculated by dividing current assets by current liabilities.

Asset Management- A set of ratios that measure how effectively a firm is managing its assets.

The ratio of sales to net fixed assets.

The ratio calculated by dividing total deposits by total assets

Profitability – A group of ratios showing the effect of liquidity, asset management and debt management on operating results.

Market Value-A set of ratio that relates the firm’s stock price to its earning and book value per share.

Fund Crisis: ABL have not enough fund. They have many deposits offers likes ABDS deposits, a special deposits is MIS. ABL gives the MIS deposits holders 10% interest in every month. As 10% of interest rate ,if any account holders deposit 10 lack taka than ABL will give him 10 thousand taka monthly. And they have many MIS holders. So they think that it is the main reason of crisis of fund, and they face shortage of fund.

Violations of regulations: They do not follow the rules and regulations, some officers are absence in two or three days in a week. It creates bad effect to other employee.

Poor management and job culture: ABL have a big problem like recently hey add online system but some branches have not this system. They have manual system, so many people cannot like this bank because in Bangladesh there are many private bank and they have online system. It is the poor management system of ABL. In IT section they have no IT manager so IT performance is very poor, many employee have no skill about IT section. So this is the reason that people cannot open account in ABL.

In ratio analysis the bank indicates some poor and some good performance .So ABL should improve some sectors to overcome some  poor situation. They should improve their fund and quality management to get ride for some poor performance situation. They should improve their fund by utilizing their money. Like they offer some scam and they give loan in high interest rate(house loans). They should change some rules of scam like MIS. They motivate people by their new scam. They should maintain and follow some rules and regulation of loans of Bangladesh Bank. They give the SME to the people for low interest rate for motivates people. They give any kind of loan and they take care the client who takes the loan.   They should improve their quality management like IT system. They must train this people who have no knowledge about IT or online system; they change the manual system and give online system in all branches. They should recruit some people in IT sectors. They also avoid politics. They must follow the rules and regulations. So they overcome this situation.