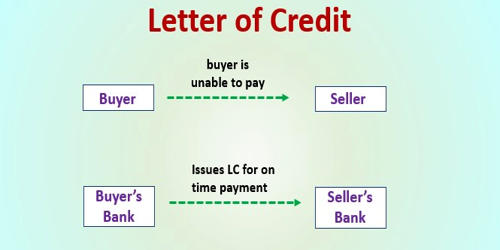 Letter of Credit (LC) is a letter from a bank guaranteeing that a buyer’s payment to a seller will be received on time and for the correct amount. It is an instrument issued by a bank at the request of a buyer of merchandise, whereby the bank itself gives a guarantee to make payment to the seller. A bank or a financial institution acts as a third-party between the buyer and the seller and assures the payment of funds on the completion of certain obligations. It is a letter issued by a bank to another bank (especially one in a different country) to serve as a guarantee for payments made to a specified person under specified conditions. In foreign trade, it is opened by an importer through his banker in favor of an exporter. This benefit is especially valuable when a client is located in a potentially unstable economic environment.

A letter of credit is a document sent from a bank or financial institute that guarantees that a seller will receive a buyer’s payment on time and for the full amount. It is an important financial tool in trade transactions. Both, domestic as well as international markets, trades use the LC to facilitate payments and the transactions. It has three important elements – the beneficiary/seller who is the recipient of the LC, the buyer/applicant who buys the goods or services, and the issuing bank that issues the LC on the buyer’s request. It is used to minimize risk in international trade transactions where the buyer and the seller may not know one another.

A Letter of Credit (or LC) is a commonly used trade finance instrument used to ensure that the payment of goods and services will be fulfilled between a buyer and a seller. The rules of a Letter of Credit are issued and defined by the International Chamber of Commerce through their Uniform Customs & Practice for Documentary Credits (UCP 600), used by producers and traders worldwide. The International Chamber of Commerce Uniform Customs and Practice for Documentary Credits oversees letters of credit used in international transactions.