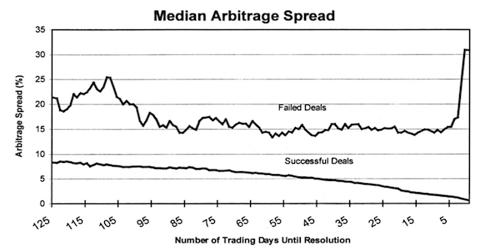 Merger arbitrage, also known as risk arbitrage, is an investment strategy that speculates on the successful completion of mergers and acquisitions. It takes advantage of market inefficiencies surrounding mergers and acquisitions. It involves simultaneously purchasing and selling the stocks of two merging companies to create “riskless” profits. An investor that employs this strategy is known as an arbitrageur. A merger arbitrageur reviews the probability of a merger not closing on time or at all.

Risk arbitrage is a type of event-driven investing in that it attempts to exploit pricing inefficiencies caused by a corporate event. It is a complex strategy requiring a combination of knowledge, experience, and skill. Because of uncertainty, the stock price of the target company typically sells at a price below the acquisition price. It is an investment strategy that capitalizes on the spread between a company’s current share price and the consideration paid for its acquisition in the context of an announced merger transaction. The arbitrageur purchases the stock before the acquisition, expecting to make a profit when the merger or acquisition completes. The merger arbitrageur seeks to profit from buying, or going long, a takeover stock at a discount to its acquisition price.

Advantages of Investing in Merger Arbitrage –

Merger arbitrage is an absolute return strategy that seeks capital growth by investing in companies involved in pending mergers, takeovers, and other corporate reorganizations with the goal of profiting from the timely completion of these transactions. It is a subset of event-driven investing or trading, which involves exploiting market inefficiencies before or after a merger or acquisition. By contrast, merger arbitrageurs focus on the probability of the deal being approved and how long it will take to finalize the deal. Since there is a probability the deal may not be approved, merger arbitrage carries some risk. The management of unwanted risk requires a combination of knowledge, experience, and skill. Merger arbitrage managers try to profit from this spread while hedging their positions against a variety of risks. After considering both the potential return relative to the risk associated with the transaction, the arbitrageur will look to invest in those deals with the highest level of return with the lowest risk.