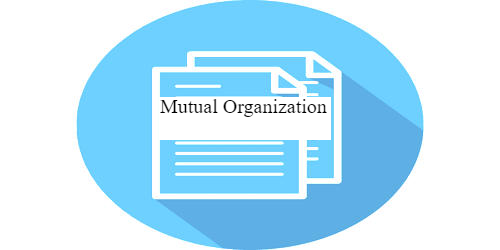 A mutual organization (or mutual society) is a company or business owned by a group of members who are stockholders in the company. It is an organization based on the principle of mutuality and governed by private law. It is a corporation that is owned by a group of members and that distributes income in proportion to the amount of business that members do with the company. Unlike a true cooperative, members usually do not contribute to the capital of the company by direct investment but derive their right to profits and votes through their customer relationship. A mutual organization or society is often simply referred to as a mutual. These organizations do not have external shareholders and sometimes are exempt from income tax. Mutual organizations have been around for centuries, but many people are unfamiliar with the term and what it means.

A mutual exists with the purpose of raising funds from its membership or customers (collectively called its members), which can then be used to provide common services to all members of the organization or society. In a developing country, some mutual organizations appear as voluntary associations for gathering and pooling money to fund marriages, funerals, or a business start-up for one or several members. A mutual is therefore owned by, and run for the benefit of, its members – it has no external shareholders to pay in the form of dividends, and as such does not usually seek to maximize and make large profits or capital gains. In a developed country, mutual societies are businesses; they operate in the same markets as corporations and compete with them. Mutuals exist for the members to benefit from the services they provide and often do not pay income tax. They are formed on a voluntary basis to provide aid, benefits, insurance, credit, or other services either to their members or to a larger population.

A mutual is a private organization that is owned by its customers, policyholders, or employees. The core principle of mutual companies is that they are owned by their members – not shareholders. Profits made will usually be re-invested in the mutual for the benefit of the members, although some profit may also be necessary in the case of mutuals for internal financing to sustain or grow the organization, and to make sure it remains safe and secure. Most people recognize mutuals as long-established building societies, co-operatives, friendly societies, and mutual insurance companies. These days, the mutual sector is very diverse including housing associations, clubs, employee-owned bodies, and specialist bodies such as football supporter trusts and community mutuals.