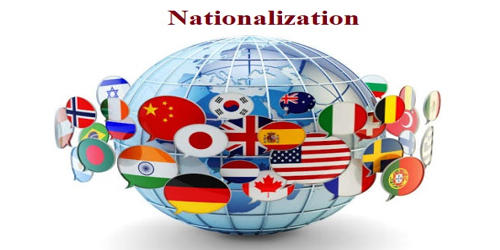 Nationalization is the process of taking privately-controlled companies, industries, or assets and putting them under the control of the government. It occurs when the government takes control of an industry previously owned by private firms. It means taking over control, the management of industrial and commercial organizations by the government from the hands of the private enterprise. It means the transfer of a major branch of industry or commerce from private to state ownership or control. It is different from privatization, in which government-run companies are moved into the private business sector.

Nationalization refers to the action of a government taking control of a company or industry, which generally occurs without compensation for the loss of the net worth of seized assets and potential income. For example, after 1945, the Labour government nationalized key industries, such as railways, steel, and electricity. The argument was that the government would be able to run the industries in the best interests of society. A government nationalizes companies in order to obtain their profits and to avoid what it considers to be exploitation of the country’s resources by the foreign company.

Common reasons for nationalization include –

Nationalization is often viewed negatively in countries with capitalist economic systems, seen by some as a slide toward socialism or communism, in which nationalization partly serves to redistribute money among all citizens. It is one of the primary risks for companies doing business in foreign countries due to the potential of having significant assets seized without compensation. It is a risk to companies doing business in foreign countries that don’t have a strong court system and don’t value democratic principles. This risk is magnified in countries with unstable political leadership and stagnant or contracting economies.