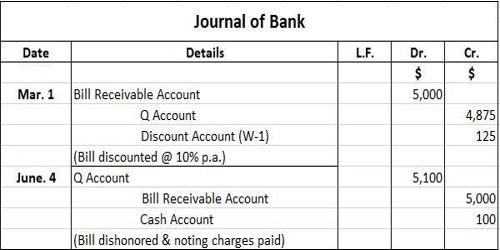 When a promissory note or bill of exchange has been dishonored by non-acceptance or non-payment, the holder may cause such dishonor to be noted by a notary public upon the instrument, or upon a paper attached thereto, or partly upon each. When a bill of exchange is dishonored either by non-acceptance or non-­payment, the holder of the bill places it in the hands of a notary public who represents the bill to the drawee for acceptance or to the acceptor for payment as the case may be. If the bill is again dishonored, the notary public records the fact either upon the bill or in a slip of paper enclosed therewith. The procedure of so certifying the fact of dishonor is called Noting.

When a bill (draft or promissory note) has been presented for acceptance or payment and has been dishonored a note to that effect is indorsed on the bill, after which it may be formally protested. Such note must be made within a reasonable time after dishonor, and must specify the date of dishonor, the reason, if any, assigned for such dishonor, or, if the instrument has not been expressly dishonored, the reason why the holder treats it as dishonored, and the notary’s charges. A minute or memorandum made by a Notary Public on a bill of exchange which has been dishonored. When a bill has been noted the protest may (in New York state) be extended as of (back to) the day of noting.

The Bills of Exchange Act instructs that noting to be done within 24 hours of dishonor. It consists of their initials, their charges, and the date.  The protest should be commenced on the day on which acceptance or payment is refused, but it may be drawn up and completed at any time before the commencement of suit or even before or during the trial and be antedated accordingly. In the case of bills of exchange drawn and payable outside Australasia, it is preparatory to a formal protest. The Bank can ‘note’ or ‘protest’ a bill of exchange if a Notary Public is not available.