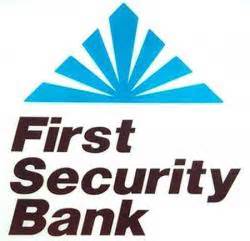 ntation of the same is provided on next page: As an owner of a bank we will analyze three area of a bank:

1.  Profitability of the Bank

This ratio indicates operating income of the bank in relation to total revenue after taking into account operating cost. Interpretation: In case of First Security Bank Limited we observed that operating profit margin ratio increased gradually over the period this indicates that the bank is operationally efficient. Interpretation: In case of First Security Bank Limited, we observed that net profit margin ratio increased over time except year 2002. This ratio has increased due to the decrease of administrative, general expense and income tax relative to revenue. Interpretation: The ratio of return on asset of First Security Bank Limited is relatively low; it is lower than 1% over the years 2002 and 2003. It had increased little in 2004 .It indicates that total asset of the bank increased but net profit did not increase with the assets. This shows the management inefficiency in using the bank asset to generate profit.

Return on Equity (ROE): This ratio indicates the degree to which the form is able to convert operating income into an after income that eventually can be claimed by the shareholder. This is a useful ratio for analyzing the ability of the firm’s management to realize an adequate return on the capital invested by the owners of the firm.

Interpretation: From the above data we find that return on equity of FSBL increased in 2004 because the bank has increased its net income as well as the equity. Provision for loan losses ratio of FSBL decreased in 2002, which shows the management efficiency to disburse and recovery of loan.: Interpretation: The data of asset utilization shows that the ratio of FSBL gradually decreased from 2001 to 2003. But in later period it increased in 2004. This indicates that the bank is most inefficient to mobilize profit from total assets. Interpretation: From the above data we see that interest income ratio decreased overtime but little increased in 2004. It indicates that the bank is trying to keep the interest income more stables and they were not successful in this area. Interpretation: Above table shows the non-interest income of FSBL increased in 2002 because of more activities other than deposit.

Equity Multiplier: Equity multiplier measures the value of assets funded with each taka of equity capital. The higher the ratio, the more leverage or debt the bank is using to fund its assets. Thus the ratio is a measure of the degree of leverage the bank is using. Interpretation: Equity multiplier of FSBL was too high, which indicates that the bank was highly depended on leverage. Interpretation: From the above data we see that interest expenses ratio was more over stable up to 2002 but increased more in 2003. It indicates that the bank was trying to keep the interest expenses more stables up to 2002but in later period they were unable to maintain the track. Interpretation: Above table shows the non-interest expenses of FSBL was decreasing  over time but it was too high in 2001 because of more activities other than deposit, which had to pay high cost. Interpretation: From 2001 to 2002, the tax ratio decreased, because the total operating income of FSBL was increased.

From the view point of Depositors: CAMEL Rating: CAMEL rating is a suitable way of analyzing bank’s financial performance. It is a technique, which is widely used by the central bank as well as financial analysts to identify bank’s financial position. Five alphabets of CAMEL means:

These cover all major aspects of financial indicators. To appropriately identify bank’s financial position, rating is used which is calculated by following way-

Elements of CAMEL rating are calculated step by step in the following: The management rating is an average of the four ratings given to capital, assets quality, earnings and liquidity. Composite Rating: Composite rating is the average of the all ratings.