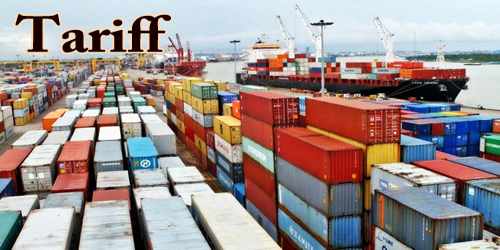 Tariff, also known as customs duty, is a type of tax levied on the goods or services imported. Through the price of goods and services imported from another country, tariffs are used to limit imports, rendering them less appealing to domestic consumers. The words tariff, duty, and customs are often used interchangeably. Tariffs are a typical element in international trade; the first reasons for imposing tariffs include (1) the reduction within the importation of products and services by increasing their prices and (2) the protection of domestic producers.

Governments impose tariffs to raise revenue, protect domestic industries or exercise political control over another country. Gottfried von Haberler in ‘The Theory of International Trade’ (1937) suggested that the best way to distinguish between revenue duties and protective duties (disregarding the motives of the legislators) is to compare their effects on domestic versus foreign producers. Through rising the cost of foreign-made products, tariffs will make domestically manufactured alternatives appear more attractive.

In general, tariffs take one of two forms: specific or ad valorem. Governments which use tariffs to benefit specific industries often do so to protect businesses and jobs. Tariffs may also be used as a foreign policy extension: placing tariffs on the key goods of a trading partner is a way of exerting economic cont

If domestically produced goods bear the identical taxation as similar imported goods, or if the foreign goods subject to duty aren’t produced domestically, and if there are not any domestically produced substitutes toward which demand is diverted due to the tariff, then the duty isn’t protective. Tariffs may have unforeseen side effects; but, by reducing competition, they may make domestic industries less productive and creative. They can hurt domestic consumers, as a lack of competition tends to push prices upwards. Through favoring some sectors, or geographic areas, over others, they may generate tensions.

Tariffs may shield domestic producers but mostly to the detriment of customers, who will have to pay higher prices. Governments often want to protect domestic manufacturers and businesses that can run into problems with cheap imported products. In addition, supporting domestic producers prevents a possible increase in unemployment. A strictly defensive duty appears to move production away from the export industries and into the covered domestic or other industries that produce alternatives that increase demand.

Some cheap imported goods could also be dangerous to consumers. By making the products dearer, the govt. discourages their excessive consumption. On the opposite hand, a purely revenue duty won’t cause resources to be invested in industries producing the taxed goods or close substitutes for such goods, but it’ll divert resources toward the assembly of these goods and services upon which the extra government receipts are spent. The govt. might want to shield industries with a strategic significance to national security from overdependence on imports.

Tariffs will support emerging industries and growing ones. This will draw more customers to domestic goods, which will boost business growth in the developing industries. Supporters of multilateral trade agreements to remove tariffs on all sides of the political spectrum argue that these agreements erode national sovereignty and promote a race to the bottom in terms of incomes, worker’s rights, and the price and prices of goods. The imposition or removals of tariffs are often motivated by political objectives.