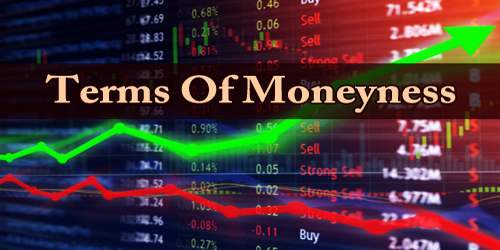 The term moneyness is most commonly used with put and call options and is an indicator as to whether the option would make money if it were exercised immediately. Moneyness can be measured with respect to the underlying stock or other asset’s current/spot price or its future price.

Actually, Moneyness gives us an indication of whether or not to exercise our stock options. Exercising is when we purchase the issuer’s common stock at the price set by the option.

The time value of an option is the total value of the option, less the intrinsic value. It partly arises from the uncertainty of future price movements of the underlying. A component of the time value also arises from the unwinding of the discount rate between now and the expiry date. In the case of a European option, the option cannot be exercised before the expiry date, so it is possible for the time value to be negative; for an American option if the time value is ever negative, you exercise it (ignoring special circumstances such as the security going ex-dividend): this yields a boundary condition.

With an “in the money” call stock option, the current share price is greater than the strike price so exercising the option will give the owner of that option a profit. That will be equal to the market price of the share, minus the option strike price, times the number of shares granted by the option (minus any commission).

As out of the money contracts have no built-in profit, their price is made up entirely of extrinsic value, and they are generally the cheapest options to buy. They can offer the opportunity for large profits, but we may need to see a significant move in the price of the underlying security for them to gain any intrinsic value. If an options contract reaches expiration in an out of the money state, then it would expire worthlessly.

An option is at the money (ATM) if the strike price is the same as the current spot price of the underlying security. An at-the-money option has no intrinsic value, only time value.

For example, with an “at the money” call stock option, the current share price and strike price are the same. Exercising the option will not earn the seller a profit, but any move upward in stock price will give the option value.

Since an option will rarely be exactly at the money, except for when it is written (when one may buy or sell an ATM option), one may speak informally of an option being near the money or close to the money. Similarly, given standardized options (at a fixed set of strikes, say every $1), one can speak of which one is nearest the money; “near the money” may narrowly refer specifically to the nearest the money strike. Conversely, one may speak informally of an option being far from the money.

Near the Money – Near the money isn’t one of the three standard states of options moneyness, but it’s still a fairly commonly used term. Near the money contracts are ones where the strike price is very close to the price of the underlying security. Basically, they are contracts that are either slightly in the money or slightly out of the money. They are often used by traders when a trading strategy requires the use of at the money contracts, but there are none available in the market.

Buying an ITM option is effectively lending money in the amount of the intrinsic value. Further, an ITM call can be replicated by entering a forward and buying an OTM put (and conversely). Consequently, ATM and OTM options are the main traded ones.

Moneyness tells option holders whether exercising will lead to a profit. There are many forms of moneyness, including in, out or at the money. Moneyness looks at the value of an option if people were to exercise it right away. A loss would signify the option is out of the money, while a gain would mean it’s in the money. At the money means that people will break even upon exercising the option.